Golden Globe and Emmy award-winning actress Laura Linney makes her London stage debut in My Name is Lucy Barton at the Bridge Theatre.

A haunting and dramatic monologue adapted by Rona Munro from Elizabther Strout’s 2016 New York Times best-selling short novel of the same name, Linney is resoundingly lauded for her luminous performances.

Strout’s Pulitzer Prize winning novel is about a woman’s unquestioning, almost animal love for her mother, and her mother’s love in return.

The production is directed by Richard Eyre, and sees the two reunite following previous collaborations – on stage Eyre directed Linney in a Broadway production of Arthur Miller’s The Crucible and on screen he directed her in his and Charles Wood’s adaptation of Bernhard Schlink’s The Other Man.

Laura Linney’s numerous film and television credits include The Truman Show, Kinsey, Love Actually, Tales of the City, The Big C and most recently Ozark for Netflix.

She made her Broadway debut in Six Degrees of Separation and subsequently played Nina in The Seagull, Thea Elvsted in Hedda Gabler, Yelena Andreyevna in Uncle Vanya, Elizabeth Proctor in The Crucible, La Marquise de Merteuil in Les Liaisons Dangereuses and most recently alternated the roles of Regina Hubbard Giddens and Birdie Hubbard in The Little Foxes for the Manhattan Theatre Club.

My Name is Lucy Brown will play a limited 3 week run from 2 June 2018 until 23 June at the Bridge Theatre, London.

Linney switches easily between different modes. She talks to us, the audience, with warmth and ease. When she characterises Lucy’s mother, prattling on about the marital misfortunes of sundry relations, her voice acquires a rasping, midwestern edge.

You can see the story in several ways but it is partly about the enforced loneliness of the writer who, at the same time, reinforces our common humanity. Linney, as a performer, has mastered the art of public solitude and gives you the uncanny feeling that you are listening not to an invented story but a slice of lived experience.”

“Laura Linney is luminous in this one-woman show.

Laura Linney gives a luminous – unaffected and deeply affecting – performance in this 90-minute monodrama which has been adapted by Rona Munro from the best-selling, first-person novel by Elizabeth Strout.

The three-time Oscar nominee manages to achieve an extraordinary directness of contact with the audience, who are wrapped around the thrust stage at the Bridge Theatre, and to snag everybody’s heart as she evokes the character’s pensive honesty about the pain that underlies what we can’t or choose not to say.

Lucy’s moment of sunset affirmation at the end (the lovely lighting is by Peter Mumford) feels like a gorgeous gathering of threads, all the more moving because of the production’s immaculate restraint.”

“At first I feared I wouldn’t get along with Lucy Barton. This Lucy Barton, at least, as there is a danger inherent in opening up something small and perfectly formed, in this case Elizabeth Strout’s marvellous 2016 novel which is essentially a monologue, and exposing its intimacies in a big space, namely the almost bare stage of the 900-seat Bridge Theatre. Constant mitigation, however, is provided by that outstanding American actress, three-time Oscar nominee Laura Linney, who gives a compelling 90-minute solo performance full of her trademark nervous smiles.

We long for the hard-hitting incidents to be unpacked a little, but that’s not Strout’s style. Instead she fashions exquisite cameo-like depictions of lives in an unassuming community, which Linney relishes: Lucy’s hatred of a cold house led her to stay behind after school in a warm classroom, resulting in ultimate academic success – and an escape route. Impressive.”

“Laura Linney is brilliant in her UK stage debut.

I have not read Elizabeth Strout’s 2016 novel ‘My Name is Lucy Barton’. And I still find it difficult to imagine its shape from Rona Munro’s twisty, turny stage monologue adaptation that sometimes feels like an overambitious attempt at slimming down something much bigger. But at its best, it achieves a cryptic, feverish intensity.

Smart lighting design from Peter Mumford maintains a dynamism and sense of shifting space in Richard Eyre’s brisk production, though I wasn’t really enamoured by Bob Crowley’s cheapo-looking projected backdrops. Really, though, it’s all about Linney, and she keeps the show on the road effortlessly.

As is often the way with a visiting celebrity, I did daydream a little about what Linney might have done if not this. But it is a privilege to see her in action and you should try and do so in the brief time that she’s here.” 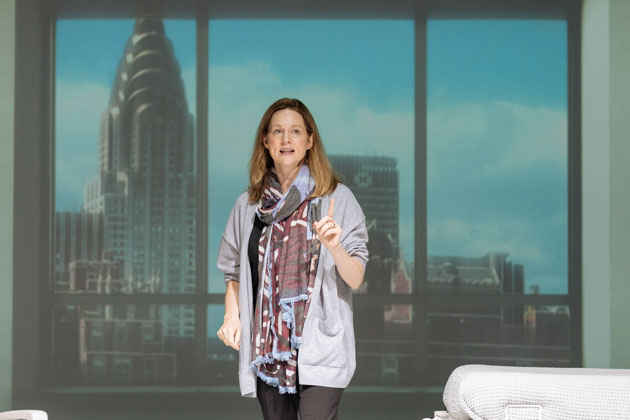 My Name is Lucy Barton is booking until 23 June 2018 at the Bridge Theatre, London.