Polly Stenham’s take on Strindberg’s explosive and classic 1888 tale of a fatal love affair arrives at the National Theatre, and sees this contemporary version move from Sweden to a mansion off Hampstead Heath.

Julie is a wild and single rich kid who’s celebrating her 33rd birthday by throwing a hardcore rave. In the kitchen, Jean and Kristina tidy up as the party booms out above them. Crossing the threshold, Julie initiates a power game with Jean. It descends into a savage fight for survival.

Stenham partly focuses on the hypocrisies of middle class liberals in relation to the ill-paid immigrant work-force.

Julie is in the Lyttleton Theatre until September 2018.

The Crown’s Vanessa Kirby impresses but this updated version of the class-conscious tragedy is overblown.

Carrie Cracknell’s production and Tom Scutt’s design are similarly overblown. Whatever his misogyny, one of Strindberg’s insights was to realise that his play demanded “a small stage and a small auditorium”. Here the play has to occupy a big theatre.

Fortunately, the acting is good. But in Stenham’s version I never felt that the tragic outcome was dictated by an inexorable dramatic force.”

“Vanessa Kirby shines, but the dramatic stakes are lowered in Polly Stenham’s update of Strindberg.

The play looks at the hypocrisies of middle class liberals in relation to the ill-paid immigrant work-force on whom their moneyed lives depend.

Carrie Cracknell’s production of this 80-minute piece is surprisingly low on sexual tension, though, and it makes some bad misjudgements. The pet canary in the Magimix, for example – a bird that makes not a peep of protest when Julie obeys Jean and pops it into the blender. The resulting red liquid looks like the basis of a new cocktail (a Canary Wharf, perhaps)? It says a lot for Kirby that her portrayal survives this “inventive” directorial flourish.”

”Provocative and profound update of Strindberg’s classic with a blinding central performance from Vanessa Kirby.

August Strindberg’s classic, in the hands of Polly Stenham and Carrie Cracknell, updated and enriched, is a piece that pulls in polar directions. It delights and distresses and aggravates all at the same time. It’s not pleasant to watch, doesn’t want to be, nor should it be.

There’s a slight unevenness to Eric Kofi Abrefa’s performance as Jean, from the sensible, suited chauffeur trying to climb the class rungs to a slightly whiny fantasist talking about eloping to Cape Verde with Julie. It seems like those two modes don’t stack up. But then humans don’t really stack up

Cracknell’s direction is astonishing in its detail – like the way it repeatedly rationalises and then shatters the fantasy of Julie and Jean’s elopement, or deals with Julie’s poor pet finch – but conflicted in its scope. As a whole, Stenham’s adaptation is brilliantly clever, but a lot of the individual lines land strangely, or sound a little naff.

When it’s so full of these tensions and torsions, it’s difficult to know how to process it. It works its way into the deep tissue of (among other things) trauma, sexism, guilt, class, racism, depression, medication, love, sex and, eventually, gets to some truth of the complexity and hardness of just existing. Yes, it’s an incredibly conflicting, irritating, provoking piece of work. But that doesn’t mean it’s any less brilliant.”

”Carrie Cracknell’s production has a strong look, with Tom Scutt’s design revelling in the contrast between domestic wholesomeness and chaotic decadence. Yet it’s oddly inert. In part this is down to a lack of chemistry in the central relationship. The passion between Julie and Jean should erupt spectacularly, but there’s no spark.

Stenham’s take on Strindberg is also a problem. Despite promising bold thinking about inequality, racial prejudice, sexual stereotypes and liberal hypocrisy, it proves colourless and slight. There’s an impulse to provoke, but no real sense of danger.”

“Vanessa Kirby is great as a disintegrating posh girl in this nightmarish production.

All the iconic/grim moments of the Strindberg original are there (bird lovers beware), but they’re smartly rationalised by the intoxication.

Cracknell’s production is viscerally effective where Stenham’s adaptation feels soft focus. Certainly there is a lot of stuff about class – and, indeed, race – that simply doesn’t get examined here. But maybe that’s besides the point: the physical sense of a life accelerating out of control is both exhilarating and horrifying, like being forced to watch somebody else’s nightmare, or seeing a rollercoaster accelerating faster and faster and faster until the inevitable occurs.”

Julie at the National Theatre 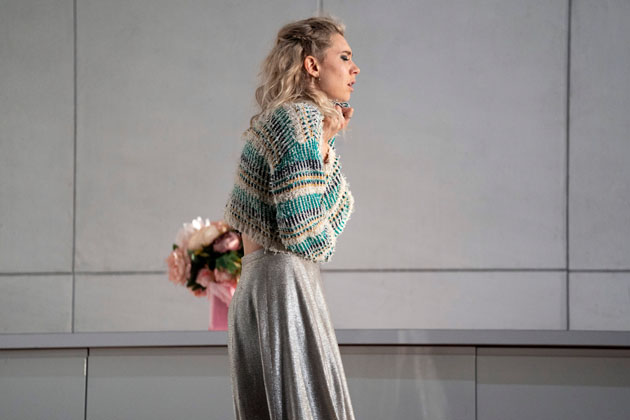 Julie is booking until 8th September at the National Theatre, London.