A review round-up of Red starring Alfred Molina and Alfred Enoch at the Wyndham’s Theatre, London.

Stage and screen actor Alfred Molina reprises his critically acclaimed performance as the American abstract expressionist painter Mark Rothko. The play tells the story of the artist’s greatest challenge as he attempts to create a definitive work for an extraordinary setting.

Alfred Molina is joined by rising star Alfred Enoch of US television drama series How to Get Away With Murder as his assistant Ken.

With excellent performances from Alfred Molina and Alfred Enoch, the West End revival is criticised for its “mannered dialogue” and celebrated for its striking design.

“Alfred Molina’s portrait is as layered as a Rothko canvas.

Michael Grandage directs a well-judged revival of John Logan’s play about the artist and his assistant.

It is one of the few plays that offers a plausible portrait of an artist at work.

The virtue of Molina’s performance is in suggesting Rothko knows full well that, in painting murals for a swish eaterie, he is betraying his own ideals.

The play offers an invigorating 90 minutes and shows Rothko’s ability to paint the town his own sombre form of red.”

“Alfred Molina plays Mark Rothko in a phenomenal production of a flawed play.

Michael Grandage’s superlative staging of the piece is uncommon in the way it also brings home the overwhelming physical presence of great pictures and the day-to-day labour that goes into their making.

It’s a pleasure to see his production back in the West End at long last, with Alfred Molina digging ever deeper in his riveting portrayal of Rothko and Alfred Enoch putting his persuasive stamp on the role originally played by Eddie Redmayne.

The unfinished pictures – slabs of red and black in pulsating interplay –  are superbly recreated in Christopher Oram’s wonderful design.

Neil Austin, the excellent lighting designer, makes the pictures glow and throb and fade and there’s a shocking moment when Ken switches on the overhead fluorescent lights – an action that rudely flattens the canvases, banishing the magic.

Molina – shaven-headed and beetle-browed – brilliantly captures the contrast between the artist’s bullying self-absorption in his dealings with Ken and his fearful, fatherly protectiveness towards his pictures which he treats like vulnerable people.

Molina inhabits the artist’s contradictions with the completeness one expects given his history with the role. His Rothko is a creature of ego and conviction, but also self-doubt; he’s aggressive, charismatic and vulnerable all at the same time. It’s a superb performance, one of real nuance and immense skill.

Enoch brings a completely different energy to the production. He’s a warmer presence than Redmayne was and he reframes some of the play’s discussion about, say, the symbolism of blackness in art. He invigorates the play, while also making its limitations apparent.

The immense convenience of Ken’s murdered parents as a plot point, the red of their blood staining his memory, feels even more contrived on second viewing. There are also moments when the play feels like an essay.

There are certainly moments when John Logan’s portrait of Mark Rothko feels like a sermon or a lecture. But it captures the grandeur of this famously imperious painter’s vision.

Crucial to this is Alfred Molina, returning to the role he played when Logan’s two-hander premiered in London in 2009. Roaring with rage and pacing like a condemned prisoner, he has both the feverish energy and the gravitas to be wholly plausible as this brilliant and titanically self-absorbed figure.

Michael Grandage’s precisely choreographed production is sensitive to the play’s tensions and rhythms, and there’s a glorious scene in which the master and his apprentice prime a bare canvas — an exhilarating ritual that bears out Rothko’s idea of art as something intimate and miraculous.”

“ This powerful revival just hits the sweet spot and Alfred Molina is a force of nature as Rothko.”

“Red has smashing performances and is directed and designed with great care and skill.

In the role as workshop skivvy is Alfred Enoch, giving a lovely open-faced performance of non-confrontational calm. So when he finally turns on his impossible master, it’s all the more effective.

Rothko didn’t do modesty. ‘There’s tragedy in every brush stroke,’ he says in full Anguished Artist mode. How you wish this insufferable egotist would put a sock in it as he sprinkles about the names of philosophers and great artists (like him).

It’s when the pair get down to work that the evening comes fully alive. There’s a terrific scene when they prime, at high speed, a big canvas from a bucket of red paint. The two end up exhausted on the floor, looking like bloodspattered axe murderers.

John Logan wrote the edge-of-your-seat film Gladiator, but in this wordy play of his there’s a lot of listening to Rothko to be done – often while watching paint dry.

Red’s compensating reward is two smashing performances in a show directed by Michael Grandage and designed by Christopher Oram with enormous care and skill. Whether this rather chuntering play deserves such loving attention is another matter.”

“Alfred Molina is a mighty Mark Rothko in this intense, visually stunning drama about the agony of art.

Michael Grandage’s production of John Logan’s ‘Red’ has lost none of its power over the decade.

US playwright Logan’s short, intense play has its faults, notably a rather American tendency towards excessively mannered dialogue (an early discussion of Nietzsche between the two could practically have been lifted from an episode of ‘Frazier’). And Ken has a tragic backstory that’s almost impressive in its contrivance.

Michael Grandage’s production is just magnificent, the stage dominated by hulking, unworldly ochre paintings (designer Christopher Oram is on the form of his life).

Though in fact, the true last scene is not a verbal one. It’s a painting, spectacularly lit by Neil Austin, that looks genuinely alive, bars of black with two pulsing red strips of colour like a gateway to somewhere far beyond. It is more powerful than words.”

Red is booking until 28th July 2018 at the Wyndham’s Theatre, London 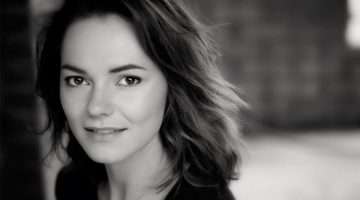