Noël Coward’s Brief Encounter is remembered as one of the most haunting and heart-breaking love stories ever told.

Emma Rice and Kneehigh’s award winning production combines the romance of cinema with all that live theatre can offer; magic, passion and surprise.

With the characteristic wit and musicality, the joy and heartache of this timeless story will be brought to the stage by Kneehigh- “the company that has put the soul back into storytelling in the theatre” – The Guardian.

Following an international tour where it opened to dazzling reviews on Broadway, this award-winning production returns to the West End for a limited season.

Brief Encounter runs from 3 March 2018 until 9 September 2018 at the Empire Cinema Haymarket.

Your heart dances. The world seems strange and new.

You want to laugh and skip and fall forever…

You are in love.

You are in love with the wrong person.

‘That’s how it all began. Just by me getting a little piece of grit in my eye.’

WHO’S IN IT? BRIEF ENCOUNTER CAST

A Knee-high production adapted and directed by Emma Rice.

★★★★★ ‘Emma Rice’s staging is a total delight. Moving, funny, gripping and even at its most inventive, true to the original and its all-English heart’ – The Times

Why book Brief Encounter tickets with us? 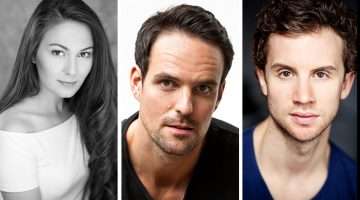