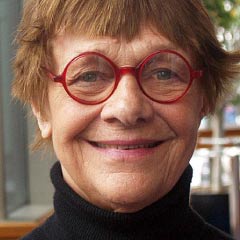 It’s never too late to try new things, as Estelle Parsons, 82, proves this August in making her West End stage debut in Deathtrap at the Noel Coward Theatre.

In the thriller Estelle plays Helga Ten Dorp, a nosy celebrity psychic literally smelling out murder around the home of playwright Sidney Bruhl (played by Simon Russell Beale). The part requires a delicious balance between comedy and authenticity, something that Ms Parsons has made a career out of.

Born in 1927, she studied law before starting as a TV production assistant and political news reporter. She didn’t make her professional stage debut until 1956, but from then on has worked  consistently across TV, film and stage.

Theatre achievements include Tony Award nominations for The Seven Descents of Myrtle in 1968, Miss Reardon Drinks a Little in 1971, Miss Margarida’s Way in 1978 and Mornings at Seven in 2002. She recently appeared in August: Osage County on Broadway and tour, a role that Charles Isherwood in The New York Times said was, “one that may prove to be a crowning moment in an illustrious career.”

Film roles include an Oscar for Bonnie & Clyde and a nomination for Rachel, Rachel.

TV work has ranged from playing the mother of Roseanne on the hit US sitcom to HBO’s recent Empire Falls.

In addition to teaching acting at Columbia and Yale, Estelle Parsons served as the Artistic Director of the Actors’ Studio between 1996 and 2001.