The multi-award winning team behind West End hits The Play That Goes Wrong, Peter Pan Goes Wrong and The Comedy About a Bank Robbery return to the West End this Christmas with a brand new improvisation show, Mischief Move Night.

Each night the crack team will create an improvised movie live on stage, using audience suggestions on genre, location and title.

The comedy show will be brought to life complete with rewinds, fast forward, directors’ cuts and a live score.

The cast includes Josh Elliot as Not Sure, Dave Hearn as Uncertain, Harry Kershaw as No Idea, Henry Lewis as Don’t Know Yet, Ellie Morris as Couldn’t Tell You, Charlie Russell as TBC, Jonathan Sayer as Who Knows and Henry Shields as Guess Who.

They will be joined onstage by musicians Chris Ash and Richard Baker.

Created by Mischief Theatre, with set designs by Tony award-winning Nigel Hook and lighting by David Howe. Adam Meggido is the improvisation consultant.

Why book Mischief Movie Night tickets with us? 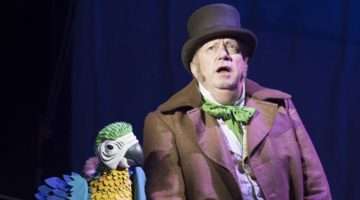