The full cast has been announced for Birdsong at the Comedy Theatre in London. 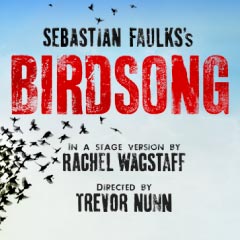 The play will starts previews at the Comedy Theatre in London on 18 September, adapted by Rachel Wagstaff and directed by Trevor Nunn.

The moving play recounts the story of a man’s all-consuming love affair, set against the horror of the First World War:

While staying as the guest of a factory owner in pre-First World War France, Stephen Wraysford (Ben Barnes) embarks on a passionate affair with Isabelle (Genevieve O’Reilly), the wife of his host. The affair changes them both forever. A few years later Stephen finds himself back in the same part of France, but this time as a soldier at the Battle of the Somme, the bloodiest encounter in British military history. As his men die around him, Stephen turns to his enduring love for Isabelle for the strength to continue and to save something for future generations.

This beautiful and haunting story about love, courage and the endurance of the human spirit will be brought to the stage in a new version by Rachel Wagstaff (The Soldier, Only The Brave) and directed by the multi-award winning Trevor Nunn, whose recent productions include A Little Night Music and Aspects of Love.

Book tickets to Birdsong at the Comedy Theatre in London

Book tickets to Birdsong at the Comedy Theatre in London

">
Kerry Jackson reviews – National Theatre
">
What’s On Stage Awards – The Nominations
">
First look: A Christmas Carol at The Bridge theatre
">
Exclusive Pre-sale: Crazy For You at the Gillian Lynne Theatre
">
Wicked movie news: Ethan Slater cast as Boq
">
Writers’ Guild Awards announces shortlist including The House of Shades
">
Wicked The Movies: What we know so far
">
Photos: Fay Ripley in Kerry Jackson at the National Theatre
">
Netflix delays UK release of Matilda The Musical movie
">
Photos: Miz Cracker in Who’s Holiday! at the Southwark Playhouse
">
Jenna Russell, Cyril Nri to star in Further than the Furthest Thing at the Young Vic
">
No Limits to play the Turbine Theatre starring Natalie May Paris
">
Marylebone Theatre announces new plays for 2023
">
Hex reviews at the National Theatre
">
2:22 A Ghost Story cast announced for the Lyric Theatre including Girls Aloud’s Cheryl
">
Now on sale: We Will Rock You at the London Coliseum
">
Roxana Silbert steps down at Hampstead Theatre due to funding cuts
">
Orlando Reviews starring Emma Corrin ★★★★
">
Casting revealed for Titus Andronicus at Shakespeare’s Globe
">
Almeida Theatre reveals casting for The Secret Life of Bees