Into The Woods, a dark and humorous twist on the Brothers Grimm fairy tales returns to London

Into The Woods
To be announced


ABOUT Into The Woods

Stephen Sondheim and James Lapine’s masterpiece INTO THE WOODS returns to London’s West End in a spectacular revival in 2020.

A dark and humorous twist on the Brothers Grimm fairy tales, this Tony and Olivier Award-winning musical interweaves everyone’s favourite storybook characters into a timeless, yet relevant, piece… and a rare modern classic.

Featuring the much loved songs Children Will Listen, Stay With Me and No-one Is Alone this enchanting and touching masterpiece was recently made into a smash-hit Disney feature film starring Meryl Streep, James Corden, Anna Kendrick and Johnny Depp.

Into The Woods is rumoured to open in London in 2020.

Everyone’s wish is granted, but the consequences of their actions return to haunt them later with disastrous results.

WHO’S IN IT? INTO THE WOODS CAST

Casting for Into The Woods is to be announced.

Music and lyrics by Stephen Sondheim and book by James Lapine.

Further creatives to be announced.

Reviews for Into The Woods coming soon.

Why book Into The Woods tickets with us? 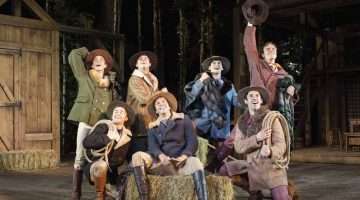