Featuring the irresistible hits of jazz legend Louis Jordan, the audience is transported back to the engrossing jazz bars of 1940s New Orleans in the specially created Marble Art Theatre.

Packed with an uplifting soundtrack of soul, blues, gospel and r ‘n’ b, and led by the all-singing, all dancing Five Guys, Five Guys Named Moe is a life-affirming theatrical experience like no other.

Featuring the toe-tapping, irresistible hits of jazz legend Louis Jordan, including: Is You Is Or Is You Ain’t (My Baby), Early In The Morning, Choo Choo Ch’Boogie, Saturday Night Fish Fry, plus many more performed live on stage by a world class jazz band.

Newly single and broke, Nomax finds solace in the Five Guys Named Moe (Big Moe, Four Eyed Moe, Eat Moe, No Moe and Little Moe), who emerge to rouse him from his misfortunes with a whole lot of soul, music and infectious energy!

Directed by Clarke Peters with musical staging and choreography by Andrew Wright, set and costume by takis, lighting by Philip Gladwell and sound by Ben Harrison.

★★★★ slick, relaxed and witty – Daily Telegraph
★★★★ ‘so full of energy that it zings – The Times
★★★★ The dancing is cool and slick… And the vocals are even better. – Daily Express
Catchy tunes from five dapper chaps. The energy levels never falter in this jazzy show – Evening Standard
★★★★ Tip-top brass with lots of sax! – Daily Mail

Please note: All tickets for Five Guys Named Moe will include a souvenir programme (worth £10) that will be handed out on arrival. All premium tickets will receive a glass of bubbly and table service before the show and during the interval.

Why book Five Guys Named Moe tickets with us? 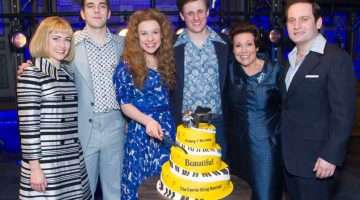 In pictures: Beautiful celebrates 1st birthday in the West End