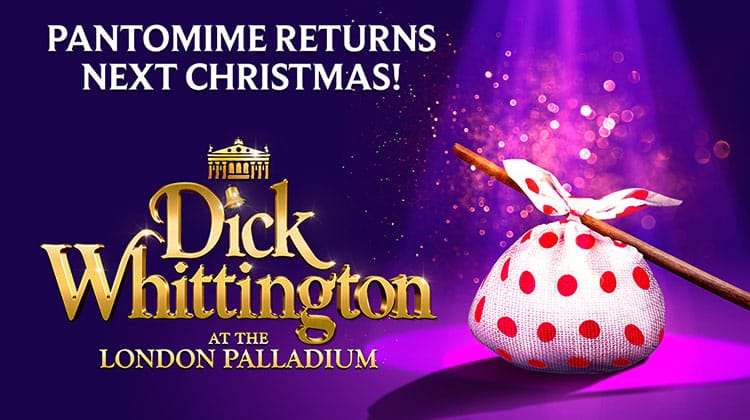 Hot on the heels of 2016’s Cinderella, Qdos Entertainment, the world’s biggest pantomime producer bring a spectacular new production to the grand stage of the London Palladium.

With an all-star cast, spectacular sets & barrels of laughs, you’ll need to book early to secure the best seats for the greatest pantomime adventure of them all!

Dick Whittington will run from 9 December 2016 until 14 January 2017 at the London Palladium.

Dick Whittington tells the rags to riches tale of a young man and his cat on an exciting quest for fame and fortune, but will the evil Queen Rat thwart his plans or will Spirit of the Bells save the day? All will be revealed in this magical pantomime!

Dick Whittington will be produced in the West End by the world’s leading pantomime producer Qdos Entertainment.

Age Restrictions: As a general guideline an age of 5+ is recommended. Children under 3 years of age will not be admitted. Children must be able to sit unaided, in their own seat, and be attentive to the performance as to not distract other members of the audience. Admittance to the auditorium is at the discretion of the theatre management.

Why book Dick Whittington - London Palladium tickets with us?

The Jungle at the Playhouse Theatre