Is David Tennant's debauched Don Juan irresistible? Find out in our reviews round-up. 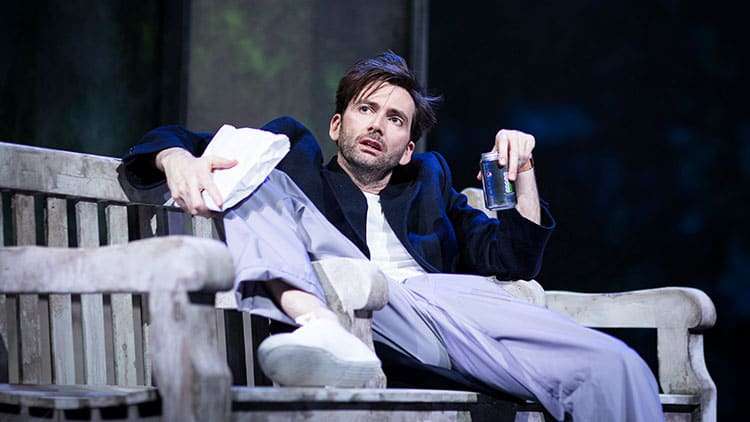 Tennant’s performance as the irresistible sexual deviant is widely praised, for his ‘beguiling, fleet-footed charm’ ★★★★ Guardian,  ‘swank and an appropriately sleazy swagger’ ★★ The Stage and for bringing ‘an exciting physicality and air of sexy mischief to the odious DJ’ ★★★ Evening Standard.  Ann Treneman, ★★★★ The Times gushes that ‘David Tennant does make a very good bad boy.’

Marber’s updated script and direction fare less well with Mark Shenton, The Stage, stating the ‘production is over-produced and lacking subtlety‘, Dominic Cavendish, Daily Telegraph, gave it the ‘red light’ saying ‘Not even David Tennant in a posing pouch can save this flaccid comedy’.

TimeOut  found it a rather enjoyable  ‘brisk, amusing production’, and The Times though there were ‘moments of inspiration’.

Still it can’t be all bad if Michael Billington, The Guardian, a bell-weather for a good show gave it ★★★★.

“Watching [Tennant], I was reminded of Christopher Hampton’s comment that the actor playing Molière’s Don Juan must seduce the audience. It is precisely because Tennant invests a heartless libertine, now simply known as DJ, with a beguiling, fleet-footed charm that Marber’s update acquires a subversiveness it lacked on its first outing at the Donmar Warehouse in 2006.” “It is Tennant’s performance that gives the play a disturbing ambivalence. He skips nimbly from one seduction to the next.” “What is unnerving, however, is Tennant’s capacity to make us empathise with an impenitent egotist driven by sexual obsession.” Michael Billington, The Guardian

“There are two reasons to see this revival of Patrick Marber’s racy play — David Tennant and Adrian Scarborough. Tennant is obviously the big draw in the title role, and he’s a charismatic blend of swagger and agility, exuding twinkly charm and leaping around the stage like a tipsy gazelle. Alongside him, as his hangdog chauffeur and fixer, Scarborough is a delight.”

“Marber’s adaptation of Molière’s classic morality play premiered eleven years ago. Now he’s updated it, and he also directs. Yet the writing never feels fierce enough. There are too many moments when the play lacks bite and seems crude or even a bit dull. ”

“I’m not going to beat about the bush. Patrick Marber’s updated version of Moliere’s hoary 1665 comedy strikes me as pants. I didn’t see it when it was first staged a decade ago at the Donmar with bad-boy Welsh actor Rhys Ifans in the predatory title role. The latter’s wild-eyed antics were celebrated as a tour de force. And the script was hailed by one critic, I kid you not, as “line by line… the best written of all Marber’s plays”– overlooking the fact that much of what aspires to make us laugh sounds like someone merely passing for a wit”

“Perhaps in a small space, the slight action galloping apace, we would, like one of the anti-hero’s numerous conquests, be seized by a brief magnetic force of purest, darkest, perversely life-affirming amorality and then be released in time to head off to Old Compton Street in search of din-dins or more. But suffering the coitus interruptus of an interval and laden with the would-be funky garb of physicalised hedonism (lots of dry-ice and cavorting, scantily clad types in masks) the show feels like a prolonged awkward fumble.’

“A red-light from me, then, for this flaccid affair although, for some, the temptation to ogle Tennant in the flesh will prove too great to resist.”

“This revival of Patrick Marber’s rewrite of Molière has its ropey moments but then this is Soho we are talking about. ”

“The set by Anna Fleischle is functional with moments of inspiration (a moving night sky) and even magic (the statue). Marber also directs and the production is uneven, not to mention borderline tacky at times (silly dancing, good karaoke). But it is also funny, acerbic, biting. [AND] David Tennant does make a very good bad boy.”

“The idea is to present [Tennant] as some sort of Russell Brand figure, seedily irresistible to slinky sirens. But Mr Tennant is not quite feral enough a figure to pull off that transformation. He is too quizzical, possibly too keen to be popular. He looks more like ITV political editor Robert Peston on a busy news day.”

“The point of the Don Juan tale, normally, is to portray excess which finally receives its dues. This Don Juan certainly lives a decadent life. There are only so many times you want to watch this playboy writhe with lasses in their smalls.”

Mr Marber’s writing is full of verve and has been updated to include topical swipes at everyone from Donald Trump to little Prince George.”

“This is a play trying to have it both ways, exposing decadence while simultaneously charging big money for that very sort of titillation. It may be exotic and handsome but ultimately it is as hooked on shallowness as Don Juan.”

“Marber directs a brisk, amusing production and he’s updated his script judiciously: a couple of gags about Donald Trump get a big cheer. The only real technical miscalculation is a smattering of rather flaccid song and dance sequences.”

“I think my biggest problem with Marber’s revival of.. classic Molière farce is that I didn’t have more of a problem with it. It is clearly somewhat misogynist, but it’s a misogyny that slips down easy in a play that is in many ways light, frothy and defined by its charismatic lead.”

“I enjoyed it, because it’s funny, because the cast is good, because you sense Marber is straining to condemn DJ.”