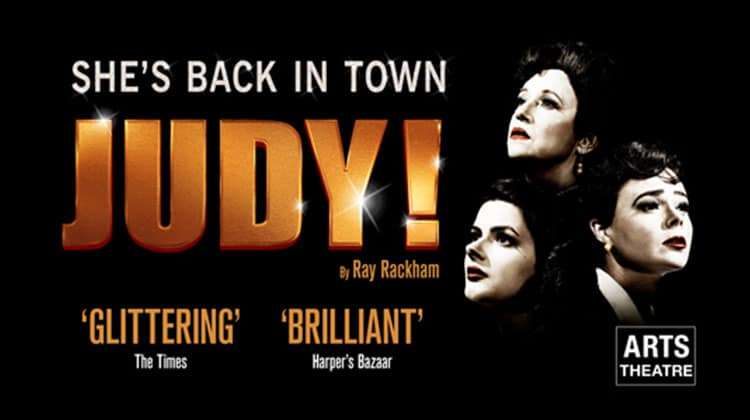 Judy! at London’s Arts Theatre.
Ray Rackham’s extraordinary biographical musical about the life of iconic movie star and chanteuse Judy Garland comes to the Arts Theatre for a limited season.

The memorable score which is brought to life by a live band, is a wonderful combination of Garland standards interlinked with some of her lesser known numbers and includes The Trolley Song, The Man That Got Away and, of course, Over The Rainbow.

Since her first tentative steps on the stage as a young girl, Judy has become an enduring icon to millions of fans of all generations around the world.

Ray Rackham has created a poignant and ultimately uplifting story portraying the star as a survivor in a man’s world.

Using three ages of Judy, he shows that her life was more than heartbreak and self-destruction.

The stories of Young Judy (an innocent girl filled with hope and excitement as she heads toward her life-changing performance in The Wizard of Oz, Palace Theatre Judy (a woman at the height of her performing powers in the midst of a passionate romance with Sidney Luft) and CBS Judy (an older and possibly wiser woman) demonstrate that no matter how hard we look for love in all the wrong places, the answer is ultimately inside ourselves.

By Richard Marsh and Katie Bonna.

Pierces the heart and raises the roof – The Times
Brilliant – Harper’s Bazaar
Rackham’s script has an overarching sense of hope and vaudevillian resilience…an unmissable production – The Stage
The show reminds us how, in the conflict between a merciless industry and the hunger for love and life, a star is inevitably torn –  Guardian

Why book Judy! tickets with us?

Prism at the Hampstead Theatre