DAVID TENNANT in GOOD at the Playhouse Theatre

David Tennant returns to the West End to play the title role in CP Taylor’s classic play GOOD at the Playhouse Theatre.

David Tennant has enjoyed a long and varied stage,  TV and film career including roles at most of the UK’s major subsidised theatres, including the Royal Court and the RSC.

For the Royal Shakespeare Company his credits include Richard II, a role he reprised last year at the Barbican and at the Brooklyn Academy of Music in New York, As You Like It, The Herbal Bed, The Comedy of Errors, Romeo and Juliet, A Midsummer Night’s Dream, Love’s Labour’s Lost and the title role in Hamlet, as well as co-hosting the live broadcast of Shakespeare 400

Tennant was last in the West End in Don Juan in Soho at the Wyndham’s Theatre.

Other recent West End roles include Shakespeare’s glorious comedy Much Ado About Nothing, playing Benedick alongside his former Doctor Who co-star Catherine Tate as Beatrice.

Other stage credits include What the Butler Saw, The Real Inspector Hound, Hurlyburly, Vassa, Look Back in Anger and The Pillowman.

On television he is best known for playing the tenth incarnation of the Doctor in the BBC’s classic series Doctor Who, and for three seasons of hit show Broadchurch and the US version, Gracepoint. He recently starred in acclaimed Channel 4 drama Deadwater Fell, and Amazon comedy drama Good Omens alongside Michael Sheen. His other television credits include playing Kilgrave in Netflix’s Jessica Jones, and The Escape Artist, The Politician’s Husband, Spies of Warsaw and Casanova, all for the BBC.

His film credits include What We Did On Our Holiday, The Decoy Bride, Fright Night, Nativity 2: Danger in the Manger!, St Trinian’s II: The Legend of Fritton’s Gold, Harry Potter and the Goblet of Fire, Bright Young Things, LA Without a Map and the forthcoming Mad To Be Normal, Fish Without Bicycles and Bad Samaritan.

Click here to book tickets to GOOD at the Playhouse Theatre 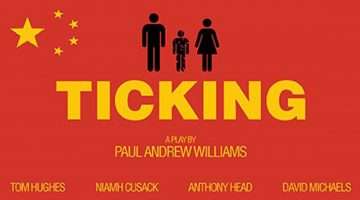