Tom Hollander stars in Travesties at the Apollo Theatre. 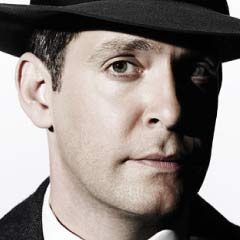 Tom Hollander continues with his acclaimed performance as Henry Carr, in the West End transfer of the Tom Stoppard’s dazzling comedy Travesties.

The film, TV and stage actor’s profile is back in the spotlight, with his recent role in the BBC drama The Night Manager garnering much critical and audience acclaim.

Hollander’s stage roles include The Way of the World at the Lyric Hammersmith Theatre in 1992 for which he won an Ian Charleson Award, The Government Inspector and Joe Penhall’s play Landscape with Weapon at the Royal National Theatre and Georges Feydeau’s A Flea in Her Ear at the Old Vic.

His movie roles include The Pirates of the Caribbean, Valkyrie, The Soloist, In the Loop, Gosford Park, Bedrooms and Hallways and Pride and Prejudice, for which he won The Evening Standard Film Awards Comedy Award, and London Critics Circle Best Supporting Actor.

Directed by Patrick Marber, the production transfers from a sell-out run at Menier Chocolate Factory’s for a limited 12 week West End run.