Was the Glass Menagerie gripping? 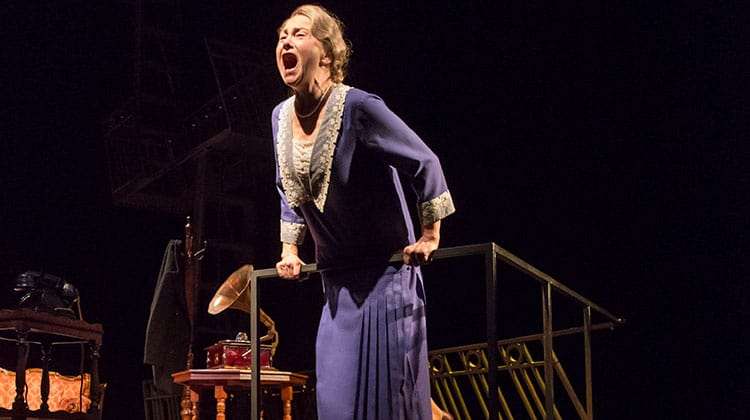 John Tiffany’s Tony-award nominated production of The Glass Menagerie has now opened at the Duke of York’s Theatre, London.

Widely regarded as a visionary staging of Tennessee Williams’ heart-rending masterpiece about a family struggling to survive on hopes and dreams, the production is led by Cherry Jones alongside Michael Esper (Lazarus), Kate O’Flynn and Brian J. Smith (Sense8).

The Glass Menagerie runs until 29 April 2017 at the Duke of York’s Theatre.

Here’s a round-up of the reviews from The Guardian, Telegraph, Evening Standard, The Stage and TimeOut.

Book tickets to The Glass Menagerie

“Long before he was one of the masterminds of Harry Potter and the Cursed Child, John Tiffany directed Tennessee Williams’s 1944 play for the American Repertory theatre at Harvard. He has now revived that production with its original star, Cherry Jones, who is a legend on Broadway but little-known in Britain.”

“in the past, I was not a total admirer of Williams’s play. It has always struck me as poised uneasily between realism and expressionism and in danger of seeming a fragile anecdote about the frustrated hopes of a shy recluse. But Tiffany and his designer, Bob Crowley, avoid gauzy wispiness and get the balance between the actual and the symbolic exactly right. The narrator, Tom, effortlessly conjures up his past so that his sister, Laura, appears through the folds of a sofa and their mother, Amanda, steps from behind a screen like a magician’s assistant. Props are kept to a minimum, meals are imagined and the most striking object on stage is a fire escape that corkscrews its way into the sky like the twisted horn on the unicorn in Laura’s collection of glass animals.”

“The triumph of this production is Jones’s performance as Amanda, the former southern belle who dreams of finding a suitor for the socially gauche Laura. Jones plays Amanda neither as a monster nor a comic figure but simply as a woman who, although she has come down in the world, clings tenaciously to the memory of her aristocratic past. Jones wears her chin high, keeps her back poker-straight and allows her hands to caress the air as if she owned it.”

“The other actors, although new to the cast, rise excellently to the occasion. Kate O’Flynn suggests that Laura, for all her physical awkwardness, has inherited something of her mother’s inner steel:Michael Esper conveys not just the sexual and spiritual restlessness of the narrator”

“A wonderfully animated performance: [Cherry] she holds court at the dinner table like some visionary political orator, later tight-rope walks across the carpet in histrionic excitement, arms flailing. You sense that she’s as confined as the son she goads and nags.”

“A finely balanced revival of this dreamlike Tennessee Williams drama ”

“Cherry Jones, one of the most revered stars of American theatre, makes an overdue and spellbinding West End debut in this finely balanced revival of Tennessee Williams’s breakthrough play — a dreamlike drama of memory, failure and illusion, which here feels carefully rooted in its Thirties setting”
“As doting Southern matriarch Amanda Wingfield, Jones has a breathy, girlish vitality yet also an air of queasy desperation. This is a tough, businesslike woman who clings to the past — when she was blessed with money and magnificent powers of attraction — but seems determined to improve her family’s standing in the present.”

“Michael Esper brings a mix of shadowy detachment and fey sensitivity to Tom, the dutiful son who’s also a dreamer. He introduces us to the stifling narrowness of the Wingfield household, conjuring poetic images of the past before stepping back into its embrace. ”

“Kate O’Flynn captures the fragility of [Laura] this limping, shy young woman, whose collection of glass animals allows her to escape the awkwardness of her secluded life.”

“Tiffany’s production is full of intriguing choreographic touches care of movement director Steven Hoggett. These include little rituals of the kitchen and the supper table and tiny apartment dances. They bring a gentle edge of the uncanny to proceedings.”

“The attention to detail – physical and psychological – throughout is considerable, and the production works that particular magic of taking something familiar and making it grip you anew.”

“John Tiffany’s production is deceptively simply staged, but also infused with all the magic that the Harry Potter director and team can bring to bear. The action – with its movement stylised by Stephen Hoggett – takes place in an inky void, a couple of rooms in a St Louis tenement surrounded by obsidian pools of water and haunted by Nico Muhly’s eerily beautiful score.”

“They blend to give it an extraordinary, dreamlike feel, halfway between hope and terror, innocence and despair, nostalgia and obliteration.”

“Esper in exemplary as narrator Tom: existing in both the past and the present, he is wracked with guilt and irritation at the family he abandoned.”

“Far from one of Williams’s usual frail cracked Southern belles, Broadway star Jones virtuosically plays her as a loving woman whose nurturing instincts have gone too far, suffocating her children.”

“O’Flynn is fantastic as Laura, picking out the most delicate of paths between tragedy and comedy as her crippling shyness threatens to disperse when a brief, beautiful chance of escape is proffered to her by Brian J Smith’s unexpectedly charming Gentleman Caller. Many productions suggest she has no chance – Tiffany’s is generous enough to show us a vision of another world where she might have been happy.

And that’s the key: other productions of ‘The Glass Menagerie’ tend to be sour or cynical, but for all its (literal) darkness, Tiffany’s absolutely isn’t. It is a vision of love, guttering in the void; a strange dream of America, falling through the night.”