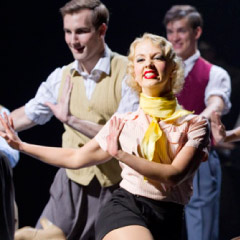 ‘Come and hear, those dancing feet, On the avenue I’m taking you to, 42nd Street.’

Chichester in West Sussex is a long way from 42nd Street in New York, but director Paul Kerryson, choreographer Andrew Wright and designer Ashley Martin-Davis have worked a special kind of theatrical magic that has narrowed the distance between The Great White Way and the South Downs. Their revival of 42nd Street, adapted from the famous 1933 screen musical, has as much pazazz and energy as anything I’ve seen on Broadway in the last ten years.

Given that Chichester’s financial resources can’t compete with the lavishness of the sets and costumes or the sheer numbers that comprised the show’s New York chorus line in 1980, this scaled-down version manages to convey the glitz and glamour of the original as well as its exhilaration and exuberance.

As every movie buff knows, 42nd Street tells the simple story of Peggy Sawyer, a naive, would-be hoofer from the sticks who comes to New York seeking fame and fortune on the Broadway stage. A lucky break lands her a role in the chorus of a new musical comedy called Pretty Lady.

During a try-out performance in Philadelphia, Dorothy Brock, the star of the show, twists her ankle, for which she holds Peggy responsible. Peggy is fired and about to return to Allentown, when the cast prevail upon their martinet director Julian Marsh, to save the show by offering Peggy the leading lady’s role. She reluctantly accepts, and, to paraphrase one of the most famous lines in musical comedy, goes out a youngster and comes back a star.

The quintessential backstage musical, 42nd Street is blessed with a cornucopia of songs by the great Harry Warren, who, in a long and staggeringly successful career, had more number one hits than even Irving Berlin. With his brilliant lyricist Al Dubin, Warren wrote the scores for a string of Warner Bros. musicals throughout the 1930’s, and this stage adaptation not only uses the score of the original 1933 movie, but plunders the best of the Warren-Dubin catalogue interpolating such evergreens as Lullaby of Broadway, Dames, We’re in the Money and my own personal favourite, About A Quarter to Nine.

Scores don’t come more melodious than this and the cast does it proud.

Lauren Hall, a name new to me, plays Peggy Sawyer, and like Peggy, lights up the stage with her singing and hoofing. It’s a terrific performance and delivers everything the part promises. There’s a feisty turn from Louise Plowright as one of the show’s writers; Tim Flavin cuts a suitably impressive figure as director Julian Marsh, and, best of all, Kathryn Evans is superb as the temperamental and demanding Dorothy Brock. A star and starry performance if ever I saw one.

Praise too, for the orchestra under Julian Kelly. This 13-piece band make as exciting a sound as anything I’ve heard from a Broadway or West End pit and give Warren’s wonderfully catchy melodies the thrilling burnish they deserve.

According to one of the characters in the show, ‘musical comedy’ are the two most beautiful words in the English language, an adage Chichester has clearly taken to heart if its run of successes in the genre (Out of this World, The Music Man, Pal Joey, Funny Girl) is anything to go by. 42nd Street could be its biggest hit yet.