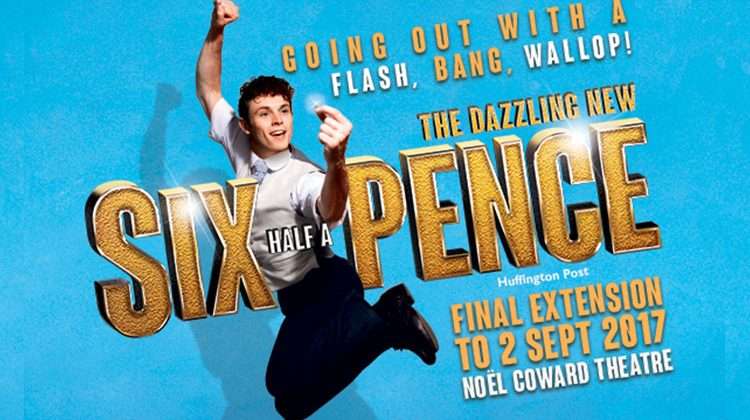 ABOUT Half a Sixpence

Following rave reviews and a record-breaking run in Chichester, HALF A SIXPENCE comes to the West End’s Noel Coward Theatre.

This new stage version of Half a Sixpence, the musical adaptation of H.G. Wells’s semi- autobiographical novel Kipps: The Story of a Simple Soul, is a completely fresh adaptation which reunites book-writer Julian Fellowes (Oscar-winning screenwriter and creator of Downton Abbey) with George Stiles and Anthony Drewe, the musical team that co-creator Cameron Mackintosh first put together to create the hit stage adaptation of “Mary Poppins” with Disney.

The score is inspired by and features several of composer David Heneker’s exhilarating songs from the original production, including ‘Flash Bang Wallop’, ‘Money To Burn’ and ‘Half A Sixpence’.

Arthur Kipps, an orphan and over-worked draper’s assistant at the turn of the last century, unexpectedly inherits a fortune that propels him into high society. His childhood companion, Ann Pornick, watches with dismay as Arthur is made over in a new image by the beautiful and classy Helen Walsingham. Both young women undoubtedly love Arthur – but which of them should he listen to? With the help of his friends, Arthur learns that if you want to have the chance of living the right life, you need to make the right choices.

Based on the H.G.Wells novel Kipps: The Story of a Simple Soul and the original musical by Beverley Cross and David Heneker, Half A Sixpence has Book by Julian Fellowes, new music and lyrics by George Stiles and Anthony Drewe, original songs by David Heneker. The production is directed by Rachel Kavanaugh, designed by Paul Brown, with choreography by Andrew Wright, orchestrations by William David Brohn, lighting by Paule Constable, sound by Mick Potter and video design by Luke Halls.

★★★★★ Flash, bang, wallop, what a show! The undoubted hit of the summer… – Evening Standard
★★★★★ What a triumph – this is a genuine masterpiece. – The i
★★★★★ If the first incarnation of this show was all Steele, this one’s PURE GOLD. – Daily Telegraph

Why book Half a Sixpence tickets with us?