Is her adopted war orphan son a terrorist, or just a boy pushing boundaries?

A reviews round-up for Luce at Southwark Playhouse.

Is her adopted war orphan son a terrorist, or just a boy pushing boundaries? The UK premiere of JC Lee’s play makes tantalising capital out of guilty feelings and a climate of suspicion.

Luce will run until 2 April 2016 at the Southwark Playhouse

“How much resolution do we crave in drama? If Pinter and Beckett have taught us anything, it is that plays are often at their best when they allow us the freedom to supply our own endings. This intriguing American work by JC Lee… would certainly have earned a fourth star if it didn’t in the last 10 minutes try to explain what had previously been ambivalent.”

“There’s a sub-genre of plays, mostly American, that serve as lacerating indictments of the limits and inherent weaknesses of liberalism. Bruce Norris’s Clybourne Park is probably the most famous recent example, and the grandma of the pack is David Mamet’s Oleanna. JC Lee’s Luce is another such.

Martins Imhangbe is inscrutable as Luce, and comedian and TV presenter Mel Giedroyc as his mother Amy knows how to play the humour but knows also that it is a minor strain in her character.”

“A perceptive take on the pressures that afflict parents, their offspring and the teachers who often mediate between them. It’s a smartly crafted 90 minutes, highlighting the evasive language of modern relationships and the delusions of adults who live vicariously through the teenagers they nurture.”

“From ‘The Bad Seed’ to ‘We Need To Talk About Kevin’, there’s a long and illustrious tradition of stories exploring a mother’s horror at raising a sociopathic, murderous kid. And it’s pretty clear why – the unseen enemy within a family is much scarier than randomised horrors lurking out there in the playground.”

“Mel Giedroyc leaves the cakes behind to star in this slightly overwrought play about a star pupil who may not be all he seems.”

The sitcommy, punchline-filled tone of the early scenes quickly gives way to hefty debates about the nature of truth, and trust.

Lee’s text doesn’t quite pick a side, leaving the escape ladder of plausible explanations next to every plunge into deeply weird behaviour. But hopelessly overwrought sound design and clumsy directorial touches combine to make it pretty clear what this production wants you to think.”

“This taut, terrific and gripping moral thriller, makes its British debut in a superbly acted production that maintains a riveting tension and troubling complexity throughout.” 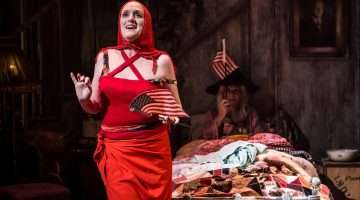