Kit Harington and Elizabeth McGovern were among the guests at last night’s opening of The Maids at Trafalgar Studios.

Jamie Lloyd was supported by family and other Jamie Lloyd productions cast members including Kit Harington and Jenna Russell who are soon to star in Doctor Faustus, Ron Cook, John MacMillan and Gary Kemp who were in Lloyd’s recent production of The Homecoming, Kathryn Drysdale who starred opposite James McAvoy in The Ruling Class and Harry Hadden-Paton who played Marlow in Lloyd’s production of She Stoops to Conquer at The National Theatre.

Jamie Lloyd’s production is an adaptation of Jean Genet’s The Maids by Cate Blanchett’s husband Andrew Upton and Benedict Andrews.

The Maids is loosely based on a true story in which two French maids for reasons never fully understood murdered their Mistress.

The production which has opened to positive reviews stars Uzo Aduba and Zawe Ashton as The Maids with Laura Carmichael playing the Mistress.

The Maids runs until 21 May 2016 at Trafalgar Studios.

Book tickets to The Maids 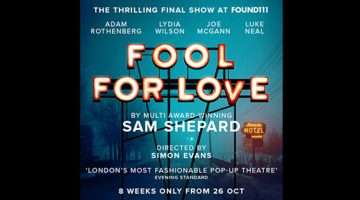 Fool For Love at the Found111