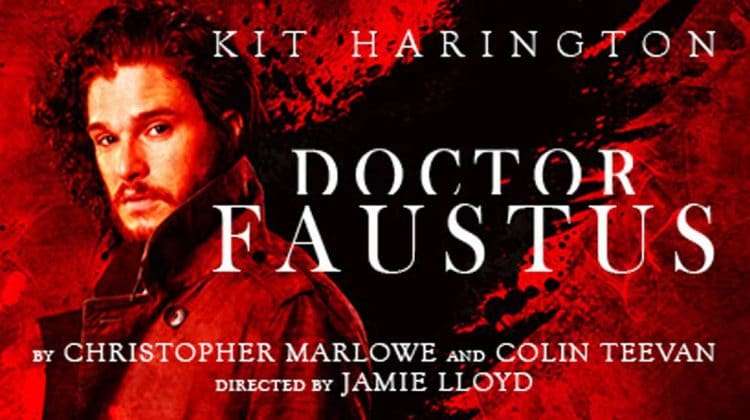 Praised for their innovative and anarchic reinvention of the classics, The Jamie Lloyd Company propels Christopher Marlowe’s legendary tale Doctor Faustus into the here and now in an explosive and magical new production starring Kit Harington (Game of Thrones) in his long-awaited return to the London stage.

Directed by Jamie Lloyd, Doctor Faustus will play a limited run from 9 April 2016 until 25 June 2016 at the Duke of York’s Theatre.

Faustus makes a pact with the Devil, selling his soul in return for the ability to perform absolutely anything he pleases with the power of black magic. This fatal decision catapults him into an intoxicating world of celebrity, as he becomes a world-renowned conjuror, international heartthrob and friend of the rich, famous and powerful. But what is the cost of his insatiable thirst for wealth and fame?

With blackly comic new scenes by Colin Teevan and dynamic stage illusions, the story of this 400-year-old play is transported to a celebrity-obsessed society of greed and instant gratification, offering a fresh perspective that chimes with our times.

Kit Harington rose to fame playing Jon Snow in the global hit Game of Thrones. His previous theatre work includes playing Albert Narracott in War Horse and in the original company of Laura Wade’s play Posh at the Royal Court.

Why book Doctor Faustus tickets with us?