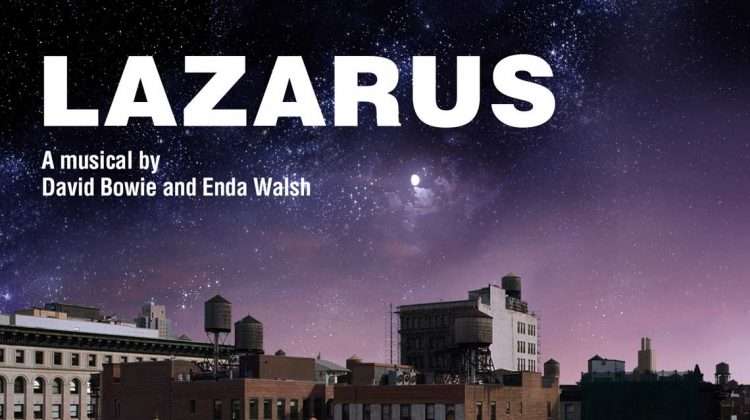 Directed by Ivo van Hove, Lazarus is inspired by Walter Tevis’ best-selling 1963 novel The Man Who Fell to Earth and features new songs specially composed by Bowie as well as new arrangements of previously recorded songs including Changes, Absolute Beginners and The Man Who Sold The World.

Lazarus is based on the classic sci-fi novel The Man Who Fell to Earth by Walter Tevis and centers on the character of Thomas Newton, famously portrayed by David Bowie in the 1976 film.

In search of water for his dying planet, an alien arrives on earth.

Experimented on by the Government and prevented from leaving, he is doomed to live a miserable reclusive life surrounded by wealth and excess.

A glimmer of hope arises when a mysterious girl appears to help him escape planet Earth. But something lurks in the shadows.

Inspired by Walter Tevis’s novel The Man Who Fell to Earth, Lazarus has a book and lyrics by David Bowie and Enda Walsh; Directed by Ivo van Hove with sets and lighting by Jan Versweyveld, costumes by An D’Huys, video by Tal Yarden, sound by Brian Ronan; choreography by Annie-B Parson and dramaturgy by Jan Peter Gerrits.

Age restrictions: The performance is suitable for children aged 12 and older. Children under 8 years old will not be admitted. Important Info: All ticket holders are required to bring valid photo ID, such as a passport, identity card, or British driving license. You may not be admitted without valid photo ID.

Why book Lazarus tickets with us?

Gemma Sutton to star as Angel on ice