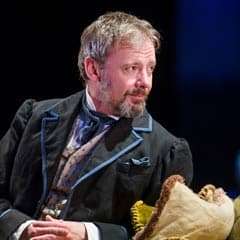 Ivan Turgenev’s passionate, moving comedy, A Month in the Country, has been a source of inspiration for films, a ballet and the plays of Chekhov. Patrick Marber’s adaptation condensed into Three Days in the Country is considerably shorter than the original which was 4 hours long without an interval.

Mark Thompson’s design has brought this 19th Century aristocratic Russian play into the modern era and the performances of John Simm, Amanda Drew and Mark Gatiss seem to have hit their mark with the critics.

A handsome new tutor brings reckless, romantic desire to an eccentric household. Over three days one summer the young and the old will learn lessons in love: first love and forbidden love, maternal love and platonic love, ridiculous love and last love. The love left unsaid and the love which must out.

Book tickets to Three Days in the Country

“Mark Gatiss is excellent.” “Amanda Drew admirably shows that Natalya is both a victim of passion and an active manipulator, John Simm turns Rakitin from a languid observer into a figure embittered by amorous disappointment and Royce Pierreson as the tutor implies that he and a maid, who at one point he voraciously kisses, represent the new world order.”

"This third hit in a row crowns an exceptional year for Patrick Marber at the National.'