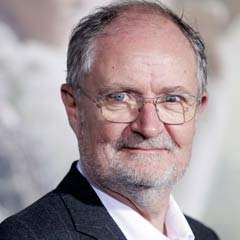 Jim Broadbent returns the London stage this Christmas in a production of Charles Dickens A Christmas Carol.

Broadbent is an Academy Award, BAFTA, Emmy and Golden Globe-winning theatre, film and television actor, best known for roles in Iris (for which he won Best Supporting Actor at the Academy Awards and the Golden Globes in 2001); Moulin Rouge (for which he was awarded the BAFTA for performance in a Supporting Role in 2001) and the international phenomenon the Harry Potter franchise. He was BAFTA nominated most recently for his role alongside Meryl Streep in The Iron Lady (d. Phyllida Lloyd, 2011). He has since continued to appear in an eclectic mix of projects, including John S. Baird’s scurrilous Irvine Welsh adaptation Filth; Roger Michell’s romantic comedy drama Le Weekend (for which he was nominated for a British Independent Film Award as Best Actor); and The Harry Hill Movie, in which he appeared in drag as a three-armed cleaning lady. More recently Jim has starred in Christopher Smith’s Christmas comedy Get Santa; and Paul King’s critically acclaimed Paddington, based on the beloved children’s books by Michael Bond. Upcoming projects include John Crowley’s romantic comedy drama Brooklyn, adapted by Nick Hornby from Colm Toibin’s novel and Jalmari Helander’s action adventure Big Game, starring Samuel L. Jackson.

Also honoured for his extensive work on television, Broadbent most recently received a Royal Television Award and BAFTA nomination for his leading performance in Any Human Heart (based on William Boyd’s novel of the same name), and had previously been recognised for his performance in Tom Hooper’s Longford, winning a BAFTA and a Golden Globe, and for his performance in The Street for which he won an Emmy. His earlier role in The Gathering Storm (2002) had earned him Golden Globe and Emmy nominations. Other selected credits include Birth of a Nation – Tales out of School (Mike Newell, 1983); Black Adder (John Lloyd, 1983); Only Fools and Horses; Victoria Wood: As Seen on TV; The Young Visiters (David Yates, 2003); Einstein & Eddington (Philip Martin, 2008); Exile (John Alexander, 2011); The Great Train Robbery (James Strong 2013). Jim is due to star alongside Ben Whishaw and Charlotte Rampling in London Spy, an original production by BBC America.

Having studied at the London Academy of Music and Dramatic Art, Broadbent has also appeared extensively on the stage, notably with the National Theatre and the Royal Shakespeare Company. His work on the stage has seen him appear in acclaimed productions ranging from Our Friends in the North (d. John Caird at the RSC Pit) and A Place with Pigs (d. Athol Fugard at The National), through to Habeas Corpus (d. Sam Mendes at The Donmar) and The Pillowman (d. John Crowley at the National).

Broadbent has previously collaborated with the creative team for A Christmas Carol, having performed for many years in Patrick Barlow’s comedy troupe The National Theatre of Brent and in 2005, Theatre of Blood at The National, which was directed by Phelim McDermott.