A reviews round-up for Temple starring Simon Russell Beale at the Donmar Warehouse. 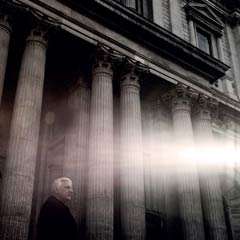 Steve Wright’s new play, a fictionalised version of the 2011 anti-capitalist Occupy movement which descended on to St Paul’s Cathedral opened at the Donmar Warehouse last night.  Reviews for Howard Davies production have so far been glowing especially for Simon Russell Beale.

‘Was it ever our choice to be the parish church of high finance?’
On 15 October 2011 Occupy London makes camp outside St Paul’s Cathedral. On 21 October 2011 a building that had kept open through floods, the Blitz and terrorist threats closes its doors. On 28 October City of London initiates legal action against Occupy to begin removing them from outside the Cathedral…

Steve Waters’ new play is a fictional account of these events, set in the heart of a very British crisis – a crisis of conscience, a crisis of authority and a crisis of faith. Simon Russell Beale returns to the Donmar to play the Dean, directed by Howard Davies.

Temple is a fictional account, inspired by the Occupy London movement in 2011

Steve Waters new play is directed by Howard Davies with design by Tim Hatley, lighting by Mark Henderon, sound by Mike Walker and is composed by Stephen Warbeck.

"A riveting drama behind closed ecclesiastical doors" "Simon Russell Beale's performance instantly ranks as one of the finest in his career" "yet another triumph for the Donmar – [Steve Waters] has taken what might sound like yesterday’s news – the Occupy London protests of 2011, and that four-month gathering outside St Paul’s Cathedral – and gone behind the head-lines, and closed ecclesiastical doors, to produce a riveting drama that unpicks the institutional and psychological turmoil the saga caused."

“Russell Beale is near his best” “This Donmar production honours the Church by taking it seriously at the same time as poking light fun.”

“Waters’s play begins bracingly. The characterisation is deft, and there are some wickedly barbed lines. The initial energy isn’t fully sustained, and Howard Davies’s sensitive production is at times too static. But Russell Beale gives us a finely nuanced portrait of a man who is ravaged by doubt, yet can respond to adversity with courage, humility and wit.”

“truly fascinating: Waters' play is both a hymn to the beauty and might of Wren’s building as it is an exploration of its history, as a place of worship and propaganda” "Intelligent and often fascinating play undermined by a static production"