A reviews round-up for Carrie: The Musical at Southwark Playhouse 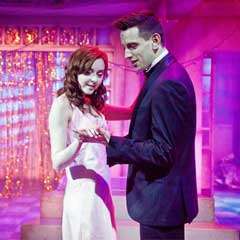 The eagerly anticipated return of Carrie: The Muscial has arrived.  Given the horror that was the original production, the critics have been impressed with Gary Lloyd’s production, but  perhaps more so with the performances than the re-imagining of the book.

Directed by Gary Lloyd, with music by Michael Gore, lyrics by Dean Pitchford and book by Lawrence D. Cohen.

Carrie:The Musical plays a strictly limited season from 1 May 2015 until 30 May 2015 at Southwark Playhouse.

Based on Lawrence D Cohen’s 1976 screenplay, itself an adaptation of Stephen King’s terrifying novel,  Carrie: The Musical tells the story of a fragile girl; bullied by her classmates and controlled by her overbearing, fanatically minded religious mother, who develops telekinetic powers.

“A mesmerising performance by Evelyn Hoskins as the flame-haired teenage avenger fires this revival of the RSC’s slaughterhouse Cinderella” “Gary Lloyd’s production opts largely for safety and blandness.” “it’s easy to see why this version of Cinderella with a slaughterhouse ending failed to fly first time round.”

“Forget the previous Carrie the Musical flop this production has been reborn” “The climactic prom scene doesn’t disappoint: there is blood, there is fire, and some impressive use of shifting scenery. But it is Hoskins you can’t take your eyes off. Blood-splattered, burning with rage” “Criswell’s voice is powerful but perfectly controlled, conveying all the warped tenderness and menace”

“This schlock-horror show is not a great musical but the young ensemble delivers it in style” “Evelyn Hoskins as Carrie impressively charts the path from vulnerability to insane rage, transforming first from cowering teenager to delicate young woman, as she blossoms briefly for the school prom, then to deranged killer” “If you’re going to watch a deranged religious mother drag her daughter round the stage while singing at top volume, this is definitely the place to do it. Kim Criswell is sensational as Carrie’s mad mother Margaret, her hair-raising solos conveying the personal pain behind her crazed religious mindset.”

"It’s taken 27 years, but Carrie is reborn." "Gary Lloyd’s revival lacks some of the nervous tension and frightening hysteria you’d expect from a show based on a Stephen King novel however it has stellar performances from Evelyn Hoskins and Kim Criswell. "