He has won a Tony Award for his performance Cabaret and an Olivier Award for Accidental Death of an Anarchist in the West End.

Alan has also been nominated for multiple Emmy and Golden Globe Awards for his supporting role on the US series The Good Wife.

He is the author of the best-selling memoir Not My Father’s Son and  You Gotta Get Bigger Dreams.

Film: The Diary, They’ll Love Me When I’m Dead, Battle of the Sexes, After Louie.

Recent writing: Honey and Leon Take The High Road, You Gotta Get Bigger Dreams (books) and articles for The New York Times and NBC News. 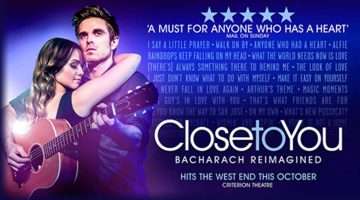 Close To You: Bacharach Reimagined at the Criterion theatre