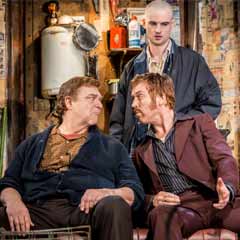 A reviews round-up for American Buffalo at the Wyndham’s theatre.

Reviews are still coming in, but so far the critics have been impressed with Damian Lewis, John Goodman and Tom Sturridge’s solid performances. Paul Will’s impressive junk shop design has definitely been a hit.

American Buffalo plays a strictly limited season at the Wyndham’s Theatre from 16 April to 27 June 2015.

“Daniel Evans’s production is meticulous in its psychological and physical detail, and there are fine performances from Lewis, John Goodman and Tom Sturridge.” “There is a lot of comedy, taking me back to the movies of Abbot and Costello, in the characters’ cross-talking ineptitude. But the magnificence of the play rests on its metaphorical richness.” “All three actors are very fine but the great virtue of this production is that it is more than a showpiece for stars and highlights Mamet’s ability to write a far-reaching fable about the jungle of American capitalism.”

“Lewis subtly threads humour into this delusional blow-hard.” “The veteran Goodman – who, hard to believe, is making his West End debut – is a class act”

"Mamet in top form is a theatrical wonder, and this production offers a top drawer cast to reveal the play’s intricate patterns" "It’s thrillingly theatrical stuff, and director Daniel Evans extracts every ounce of feeling and fear from his three superb leading actors. A vocally and physically much-altered Damian Lewis captures perfectly the swagger of a man who suddenly spies an opportunity to make some cash. The bulky John Goodman exudes personality as the shop-owner while Tom Sturridge as his nervy sidekick suppresses his, both to equally stunning effect."