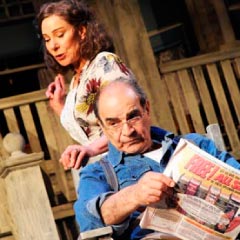 A round-up of reviews of All My Sons at the Apollo Theatre in London, starring David Suchet and Zoe Wanamaker.

IN SUMMARY: This is a stunning production of a modern classic and one that those who see it will never forget.
THE PLAY: This is a play of extraordinary power and emotional depth, and when it is performed as wonderfully as it is here, Miller’s theme of man’s responsibility towards his fellow men feels genuinely noble rather than merely didactic.
THE CAST: The great David Suchet has never been better than he is here as the initially jovial Joe Keller, who seems to shrink within his own body as the chickens come home to roost; Zoë Wanamaker is also outstanding as his wife, clenched with grief and driven almost mad by the lie on which her life is based, and there is terrific support from Stephen Campbell Moore as the honourable surviving son and Jemima Rooper as the girlfriend who delivers the coup de grace.

IN SUMMARY: Not only is the acting tremendous and every visual detail precise, Davies also makes you realise Miller’s play is a portrait of a society as well as of a flawed individual.
THE PLAY: You could quarrel with Miller’s occasional melodramatic touches, in particular the fiancee’s revelation of a crucial letter she has kept hidden for three years. But the power of the production lies in the stripping away of protective illusion.
THE CAST: David Suchet’s superb Joe is a man who conceals his guilt under a backyard bonhomie… Zoe Wanamaker is no less astonishing as Joe’s wife…. There is fine support from Stephen Campbell Moore as the impossibly idealistic surviving son, and from Jemima Rooper as the tenacious fiancee.
Read the review

IN SUMMARY: You won’t find better performances in the West End right now than those of David Suchet and Zoë Wanamaker in Howard Davies’s meaty, satisfying production of this 1947 Arthur Miller play.
THE PLAY: Of all Miller’s plays, this one throbs most strongly with the influence of Ibsen. It compellingly charts the relationship between actions and their morbid psychological causes, and there’s a note of Nordic mysticism beneath its richly furbished reality.
THE CAST: There’s excellent work from Stephen Campbell Moore as Joe’s affectionate, attentive son Chris, and from Jemima Rooper, warm and twinkly but soulful as Ann, his brother’s one-time lover and the woman he now aspires to marry. Wanamaker is husky, poised and poignant, a model of tortured seriousness. It’s Suchet, though, who dominates. He invests Joe with a lovely geniality, yet also with gravitas and a wounded, anxious manliness. Every nuance of his performance feels perfectly weighted.
Read the review

IN SUMMARY: … watching Howard Davies’s emotionally searching, expertly acted revival, you’re persuaded that this is a small price to pay for the play’s fierce moral fervour and the psychological penetration of its insights.
THE PLAY: Miller’s Ibsenite plot occasionally creaks and is marred by certain implausibilities; but while it lasts, you are swept up by the production’s splendid self-conviction.
THE CAST: Zoë Wanamaker is superlative in the role, showing you a woman who is a heartbreaking and deeply unnerving mix of agitated neurosis and indomitable will… David Suchet is on magnificent form as Joe Keller… Stephen Campbell Moore, in a finely judged performance, lets you see, as well as the principled idealism, the aggrieved priggishness of a youth who affects to despise his father’s soiled money without decisively renouncing it.

IN SUMMARY: Along with some excellent acting, we can admire all over again the way in which this family drama also perfectly illustrates how man’s responsibility to his fellow man goes way beyond his family and the domestic economy.
THE PLAY: Act I takes a while to warm up, and there is little hint of the drama to come. You’re reminded here of what Miller’s plays offer and what they don’t: compelling moral drama, rich characterisation, humanity, yes; but no real wildness, madness or mystery.
THE CAST: You’re riveted not least by the acting. David Suchet, as Joe Keller, is magnificent… Less convincing is Zoë Wanamaker, as Kate. Her fragility seems too obvious, and her sudden grief too actorly: arms over the head, animal howl, slow subsidence to the floor… Most compelling of all, though, is Chris, superbly played by Stephen Campbell Moore. Here is a good man who is also fascinating, tormented, passionate, upright and angry, the epitome of the Miller hero, set on doing the right thing and disgusted when others don’t. He is the play’s moral centre, and Moore invests him with all the power and presence to be so.

All My Sons at the Apollo Theatre in London 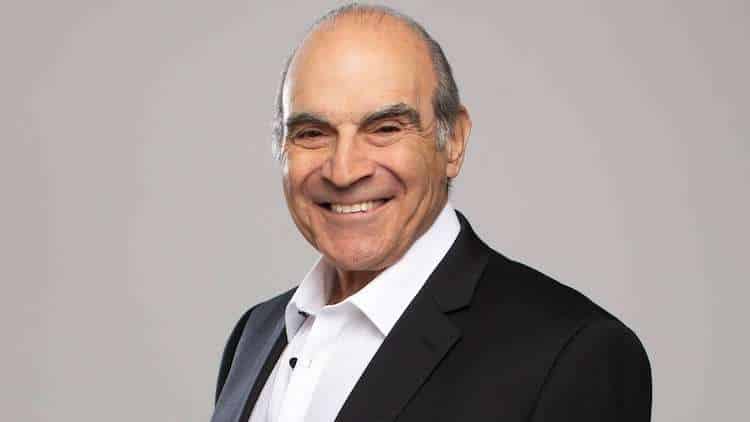 1 thought on “All My Sons – Reviews Round-up”