A reviews round-up for Women on the Verge of a Nervous Breakdown starring Tamsin Greig and Haydn Gwynne at the Playhouse Theatre. 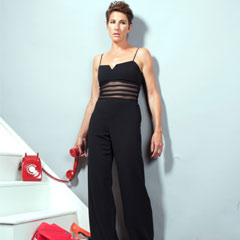 The UK premiere of David Yazbek and Jeffrey Lane’s musical comedy adaptation of Pedro Almodóvar’s Oscar-nominated film Women on the Verge of a Nervous Breakdown opened at The Playhouse Theatre on 12 January 2015.

We were worried how this show would fare given its early closure on Broadway, however with some extensive re-working, the UK premiere of Women on the Verge of a Nervous Breakdown is a hit with the critics.

See the reviews below.

Book tickets to Women on the Edge of a Nervous Breakdown

Women on the Verge of a Nervous Breakdown reviews

The Daily Telegraph
★★★★
“An absolute joy of an evening, built paradoxically on the despair, rejection, heart-break and jealousy that comes with love betrayed” “This is an absolute joy of an evening, built paradoxically on the unhinging despair that almost all of us experience in facing rejection, heart-break and the jealousy that comes with love betrayed. Is it a treat for the ladies? Probably more so than the blokily scripted Made in Dagenham, and yet it’s more palatable, in its tongue-in-cheek verve, for men too. I’d also add that thanks to a smart book by Jeffrey Lane and taut direction from Bartlett Sher, the gag-count is much higher than in the 1988 film.”
Read more
The Independent
★★★★
“There's a dream-like fluidity to the craziness here which is played out on a white, split-level apartment set, suffused with the shifting lilacs, peaches and limes of Peter Mumford's lovely lighting design that acts as the equivalent of the stylised, candy-coloured gaudiness of the look given to liberated, late 1980s Madrid in the movie. “ “Greig's superb timing and her matchless ability to flicker between comic absurdity and desolate melancholy and to show the perilous closeness of shaking with laughter and shivering with tears are tremendous assets for a piece that proves there's no incongruity between frenetic farce and the expression through song of the fraught emotions that fuel it. “ “Haydn Gwynne is bliss as the bonkers Lucia, a mad Fury swathed in the 1960s outfits (including a lunatic pink Jackie Kennedy number) that pre-dated the incarceration caused by her husband's desertion, but hauntingly communicating in “Invisible”, which is the best song of the evening, the tragic price she has paid for this long suspension of time.”
Read more
The Guardian
★★★
“elegant and edgy but lacks Pedro power” “Tamsin Greig, one of the most subtle of actresses, is appealing less because of her singing voice than because of her extraordinary ability to unravel in an instant from wiry intelligence to wobbling despair. Anna Skellern provides a terrific turn in a telephone song – yelping and sobbing – as she pinballs around the stage.” “Yet only one number is transcendent. Invisible is mighty, thanks to Yazbek’s lyrics. It is surely the first song to be written about what happens to middle-aged women: “tangible not visible like gravity or the air”. Haydn Gwynne’s delivery, a caressing foghorn, makes it a Send in the Clowns moment: utterly arresting, and sure to be reinterpreted again and again. In a clever irony, Invisible is put in the mouth of someone who sticks out like a sore thumb. Gwynne is the ex-wife cuckoo enough not to know that wearing clothes (huge Jackie O glasses, candy-pink boxy suits, these costumes are excellent) that date from 20 years earlier make her look cuckoo.”
Read more
Daily Express
★★★★

“Funny, frantic and vivacious it puts a smile on your face and a weevil in your brain.”

“There is something of Joe Orton's subversive spirit about it: the refusal to take itself seriously yet dealing with serious matters, the black humour and hyperactive farce.”

Read more
Evening Standard
★★★
"Stellar performances from Tamsin Greig and Haydn Gwynne carry this musical version of Pedro Almodóvar’s Eighties film."
Read more
Financial Times
★★★★
“a joyous evening: an affectionate, poignant and defiant tribute to female resilience” “Greig brings her touching tragicomic expertise to Pepa and a rich, rough emotional truth to her musical solos. Gwynne is superb as the ex-wife and her painful song about the invisibility of middle-aged women gets to the heart of the show.”
Read more
Daily Mail
★★★★
“This inventive new version of Pedro Almodovar’s 1988 classic film is a stylish hoot – a fiesta of PMT with monstrous, ticklish caricatures and, ultimately, a heart very much in the right place.” “a cheerful, life-affirming lament about sisterly solidarity in the face of rotten, beastly men. Magnifico!”
Read more
👤WestEndTheatre 📅13 January 2015
Tags: Anna Skellern, Haydn Gwynne, Jerome Pradon, Playhouse Theatre, Reviews, reviews round-up, Seline Hizli, Tamsin Greig, Willemijn Verkaik, Women on the Verge of a Nervous Breakdown
📷 Main photo: A reviews round-up for Women on the Verge of a Nervous Breakdown starring Tamsin Greig and Haydn Gwynne at the Playhouse Theatre.