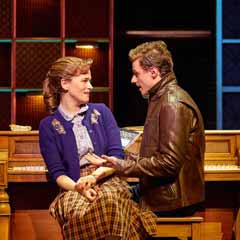 BEAUTIFUL tells the inspiring true story of music legend Carole King, from a Brooklyn girl with passion and chutzpah through to her remarkable rise to stardom. The show charts her beginnings as part of a hit songwriting team with her husband Gerry Goffin, to her relationship with fellow writers and best friends Cynthia Weil and Barry Mann, to becoming one of the most successful solo acts in popular music history.
Along the way she made more than BEAUTIFUL music, and wrote the soundtrack to a generation.

"Carole King’s album Tapestry has sold more than 25 million copies, and even if you’ve never heard of her, you’ll know plenty of her catchy songs. This affectionate jukebox musical focuses on her route to success, between the ages of 16 and 29. This isn’t exhilaratingly dramatic. But Marc Bruni’s staging is slick and witty, Douglas McGrath’s book nicely highlights the industrial efficiency of the music business, and Derek McLane’s sets reinforce the impression of a world in which musicians are treated as soulless hirelings."

" [Brayben] gives a wonderfully endearing performance that seems to soar beyond mere impersonation as it communicates King's warmth, modesty, self-deprecating humour, and touching integrity and projects the straight-from-the-heart candour of that nasal, husky, plaintively yearning singing voice. " "As if the cornucopia of one of the catchiest back-catalogues in the pop canon weren't enough, this likeable, zestfully performed show also has the advantage of other evergreens (“You've Lost That Loving Feeling”, “On Broadway”) by friendly rivals, Barry Mann and Cynthia Weil whose wisecracking but less complicated partnership (engagingly handled by Ian McIntosh and Lorna Want) "

"Fans of the singer-songwriter Carole King may be happy just to hear a replay of her biggest hits in this West End musical, an efficient re-creation by Marc Bruni of his original Broadway production but with a British cast. While the show is pleasant enough, it struck me as the theatrical equivalent of one of those bland Hollywood biopics in which a local boy or girl makes it to the top of the showbiz ladder." "It’s good to hear some of the old songs again, such as It Might As Well Rain Until September and The Locomotion, and to be reminded of groups like the Righteous Brothers and the Shirelles. But the attempt to link the songs to the life feels strained, there is little of the ecstasy that drives Sunny Afternoon about Ray Davies and the Kinks. At the end, I felt I still didn’t really know Carole King. She comes across as a shy, well-adjusted woman struggling to reconcile a career with a failing marriage."

“They don’t erect statues to living people but no such qualms exist in musical theatre.” This is a big American production and it is slickly done. A busy ensemble gives us the Drifters, the Shirelles and the Righteous Brothers in best karaoke fashion.” “Its Americanised, airbrushy niceness aside, this show is sweet and happy as pie. It milks the tear ducts, gives you a long list of searing songs and will send many a couple home arm-in-arm to the very suburbs Carole King adored.”

“Katie Brayben gives a career-making performance as the legendary singer-songwriter Carole King in an otherwise workmanlike production” “[Brayben] captures King’s familiar, plaintive intonations and her searing, sustained surges but when she sings numbers such as It’s Too Late and You Make Me Feel Like A Natural Woman they appear to come from some core part of her. What could be the show’s one-note trick, hearing songs emerging as if at the moment of composition, acquires real magic. Brayben’s crowning achievement, written in the soulfulness of her performance, is to embody the take-home message that it’s what’s inside that counts, what comes from within that makes you beautiful.”

"If Douglas McGrath’s by-numbers book is otherwise all too conventional, there is at least the compensating pleasures of hearing some truly great songs. And in the midst of this decidedly three-star show, there’s a five-star winner of a performance from the previously unheralded Katie Brayben as King. The show, framed by her 1971 Carnegie Hall concert, opens with her seated at a solo piano performing So Far Away and ends in the same spot with her singing Beautiful, with a tumble of auburn hair falling over her shoulders. It’s a powerful, poignant sight, putting her centre stage again where she belongs." Verdict "All-too-conventional bio-musical, thrillingly elevated by Katie Brayben’s stellar performance as Carole King"