A reviews round up for Di and Viv and Rose at the Vaudeville Theatre starring Tamzin Outhwaite, Jenna Russell and Samantha Spiro. 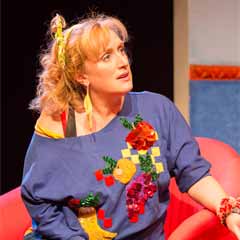 Directed by Anna Mackmin, Di and Viv and Rose is written by acclaimed author and actress Amelia Bullmore, with design by Paul Wills, lighting by Oliver Fenwick, sound by Simon Baker, choreography by Scarlett Mackmin and costume supervision by Jackie Orton.

Find reviews below from The Telegraph, Evening Standard,

"Amelia Bullmore’s sprightly play about three uni students and their lifelong alliance brings the best out of Tamzin Outhwaite and her co-stars." "It’s taken four years for Amelia Bullmore’s play to make the journey from Hampstead Downstairs to the West End but it’s been worth the wait. Even if the play, spanning nearly three decades, occasionally falls into sitcom mode, it explores the highs and lows of female friendship with a good deal of comic brio."

"Women who’ve been round the block are lapping up Amelia Bullmore’s funny and touching hymn to friendship. But it would be a mistake to think of this show, first seen at the Hampstead theatre in 2011, as being for women only. " "The cast’s chemistry is palpable, too, with Outhwaite providing idealism and pain, Spiro providing drive and remorse and Russell providing heart and soul. A bittersweet lesson in friendship for men and women alike."

"Di and Viv and Rose is a moving and surprising pleasure of an evening, that sends you out into the night with a lump in your throat."

"The performances in Anna Mackmin’s easy-going production are top-notch. Spiro’s spikiness covers fierce loyalty and Russell is a wonderfully chaotic bundle of energy. It’s an interesting decision to have fortysomething actresses play these parts; wisdom and experience are suggested but as the performers are much older than their characters, they do sometimes feel at a slight angle to the action. Even so, this is heartfelt, watchable drama. Di and Viv and Rose await the pleasure of your company."

" DI AND VIV AND ROSE is Amelia Bullmore’s charming, funny and tender play about 30 years of female friendship" "The women’s rapport is reflected in that of the three splendid actresses, even if Rose’s “I know we’re all 18 but we’re very mature for our age” seems somewhat barbed when they are well into their forties."

"While it's hugely uplifting to see a West End play written by, directed by and starring a cast of women, which is genuinely funny and moving in its celebration of female friendship, it does feel as if some vital spark has been lost in the recasting of the piece."