Damian Lewis returns to the West End in David Mamet’s American Buffalo at the Wyndham’s Theatre. 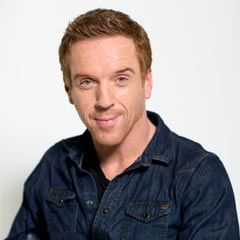 Damian Lewis is an internationally acclaimed stage, TV and film actor.   American Buffalo marks Lewis’s return to the stage since he starred as Alceste in Martin Crimp’s 2009 adaptation of The Misanthrope opposite Keira Knightley.  Most recently Lewis has won international prestige for his role in Emmy and Golden Globe award-winning drama Homeland opposite Claire Danes and the 2015 BBC Two television miniseries adaptation of Hilary Mantel’s Booker-Prize winning novel Wolf Hall.

Prior to his role in Homeland, Lewis first came to the attention of international audiences in 2001 with his Golden Globe-nominated performance in the award-winning HBO miniseries Band of Brothers, directed by Steven Spielberg and produced by Tom Hanks. He also starred as Soames Forsyte in the acclaimed British production of The Forsyte Saga and Charlie Crews in Life.

Lewis has recently appeared on film in Julian Fellowes’ recent adaptation of Romeo and Juliet which starred Douglas Booth and Hailee Steinfeld in the titular roles, The Sweeney and David Gordon Green’s Your Highness. Lewis has recently completed production on a number of films due for release in 2015 which include Werner Herzog’s Queen of the Desert opposite Nicole Kidman, the adaptation of John le Carré’s novel Our Kind of Traitor alongside Ewan McGregor, Stellan Skarsgard and Naomie Harris and The Silent Storm which received its world premiere in October 2014 at the BFI London Film Festival.

EDUCATION
Lewis was educated at an independent English boarding school and then went on to study at the Guildhall School of Music and Drama (alongside American Buffalo director Daniel Evans).

After training at the Guildhall School of Music and Drama, Lewis joined the British theatre community and appeared in a number of plays between 1993-98, primarily as a member of the Royal Shakespeare Company. During that time, he starred as Laertes in Jonathan Kent’s Broadway production of Hamlet opposite Ralph Fiennes. In 2003, Lewis returned to the London stage opposite his late wife Helen McCrory in Five Gold Rings at the Almeida Theatre. In 2005 he starred in the National Theatre’s production of Ibsen’s Pillars of the Community.  Other RSC credits include Little Eyolf & Cymbeline. Lewis also played the Wolf in Into The Woods at the Donmar Warehouse. Other roles include Martin in Edward Albee’s The Goat, Or Who is Sylvia? at the Theatre Royal Haymarket.

His extensive television credits include Wolf Hall, Homeland, Stolen, Life, Have I Got News for You, Much Ado About Nothings, Friends and Crocodiles, Colditz, The Forsyte Saga, Jeffrey Archer:The Truth, Band of Brothers and Hearts and Bones.

FILM
Lewis’ film credits include The Silent Storm, Queen of the Desert, Our Kind of Traitor, Romeo & Juliet, The Sweeney, Will, Your Highness, The Escapist, The Baker, Stormbreaker, The Situation, An Unfinished Life, Chromophobia, Brides, Keane and Dreamcatcher.