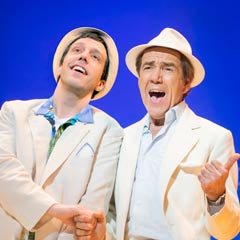 Jerry Mitchell’s acclaimed production of musical comedy Dirty Rotten Scoundrels is to leave the Savoy Theatre in London on 7 March 2015.

The show will embark on a major UK tour from May 2015, opening at the New Alexandra Theatre in Birmingham from 5 – 16 May 2015 and then visiting the Manchester Opera House, the Sunderland Empire, the King’s Theatre in Glasgow, the New Theatre in Oxford and the Edinburgh Playhouse.

The show has been playing at the Savoy since February 2014 and is directed and choreographed by Tony Award winning Jerry Mitchell (Kinky Boots – currently Broadway’s biggest Tony Award winning hit and Legally Blonde), with music and lyrics by David Yazbek and a book by Jeffrey Lane.

This production of Dirty Rotten Scoundrels is glamorous, slick and fabulously funny, featuring some truly star performances particularly from Robert Lindsay, Alex Gaumond and Katherine Kingsley. Don’t miss the chance to see this big, glossy production before it leaves the West End.