Reviews of The Scottsboro Boys at the Garrick Theatre 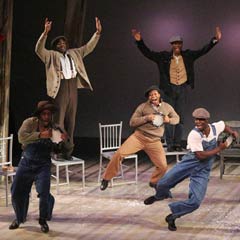 The Scottsboro Boys at the Garrick Theatre. Photo: Roy Tan

Following a sell-out production at the Young Vic in 2013, the show transfers into town for a limited season at the Garrick.

And critics returning to the show following their glowing 2013 reviews at the Young Vic, are once again full of praise for Susan Stroman’s production.

The Scottsboro Boys tells the shocking true story of nine young black men who were wrongly accused of raping two white girls, and the extraordinary and heart-breaking miscarriage of justice that kept them in an Alabama prison for years.

Starring Broadway star Brandon Victor Dixon, who returns to the role he originated as Haywood Patterson, the show won a Critics’ Circle Best Musical in 2013 for Kander & Ebb (Chicago, Cabaret).

The show is directed and choreographed by five-time Tony Award winner Susan Stroman (The Producers, Bullets Over Broadway).

More news and info about The Scottsboro Boys on WestEndTheatre.com >

SPECIAL OFFERS AVAILABLE: Book tickets to The Scottsboro Boys at the Garrick Theatre

“”Audacious and troubling, it is delivered with brilliant precision here. Tap-dancing through a number about the electric chair, harmonising in a spiritual that slips in a line about lynching, the cast perform with tremendous verve and handle Stroman’s choreography with split-second timing. But they also zip from ensemble to individuals, as they trace the separate tragedies of each young man.”

“Susan Stroman’s production – cleverly and simply designed by Beowulf Boritt – mines the dark, brutal humour to an entirely merited and an almost uncomfortably provocative degree. The choreography is often electrifying, particularly in a brilliantly nightmarish tap-dancing sequence featuring an electric chair. This is a show that boasts a brilliant ensemble, but Brandon Victor Dixon shines particularly as Hayward Patterson, a man who refuses to sacrifice the truth for parole.”

“This is a hurtling journey into hell; I urge you to buy a ticket. John Kander and Fred Ebb’s 2010 musical, seen at the Young Vic last year, is a shocking experience — the more so because it is also irresistibly entertaining.”

“The music is magnificent, a stirring, period-specific mixture of gospel, jazz and vaudeville. The plaintive lament Go Back Home is especially memorable, but on the whole the songs are jovial and up-tempo in a deliberate undercutting of the seriousness of the storyline.” 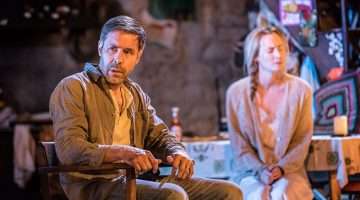