Winner of 8 Tony Awards including Best Musical, 11 Drama Desk Awards and the Drama Critics’ Circle Award for Best Musical, Sweeney Todd features music and lyrics by Stephen Sondheim and book by Hugh Wheeler from an adaptation by Christopher Bond.

Originally produced by the New York Philharmonic at the Lincoln Center in New York, the show garnered incredible reviews for Emma Thompson and Bryn Terfel.

Running at the London Coliseum from 30 March to 12 April 2015, Sweeney Todd promises to be an extraordinary theatrical event.

Set in Victorian London, Sweeney Todd: The Demon Barber of Fleet Street tells the thrilling story of a barber who seeks vengeance on what he sees as a merciless world by murdering his customers. And with the help of his landlady, Mrs Lovett, they bake their bodies into meat pies, which are fed to hungry customers in Mrs Lovett’s pie shop.

For the New York Production:
★★★★ “An energetic theatrical performance that manages to hit the right notes” The Guardian
“[Emma Thompson’s] performance was by virtually all measures a triumphant one” New York Times
“[Bryn Terfel] may be the most richly gifted singer ever to undertake the title role” New York Times
“[Emma Thompson] stole the show” New York Daily News
“In these days of downsized Broadway bands, this is a rare opportunity to hear a truly great musical theater score performed by a full orchestra. And getting to see Thompson dish out cannibal savories with such relish is a treat too good to pass up.” Hollywood Reporter

Emma Thompson is an award-winning actor, writer and producer who returns to the London stage for the first time in 25 years to play Mrs. Lovett. She last performed in the West End in 1989 in Look Back In Anger, directed by Judi Dench. This acclaimed production saw Thompson’s London Coliseum debut, when a fundraising performance was held at ENO’s home theatre. Thompson’s 1992 portrayal of Margaret Schlegel in the Merchant-Ivory adaptation of E.M. Forster’s Howards End earned her numerous Best Actress awards including the BAFTA, the Los Angeles Film Critics Award, the New York Film Critics Award, the Golden Globe and the Academy Award. In 1995 her adaptation of Jane Austen’s Sense and Sensibility, directed by Ang Lee, won several awards for its screenplay including the Academy Award, with her performance earning her a BAFTA. This summer Thompson has completed filming The Long Midnight of Barney Thomson opposite Robert Carlyle and Ray Winstone as well as A Walk in the Woods, opposite Robert Redford and Nick Nolte, directed by Ken Kwapis. In March of this year she portrayed ‘Mrs. Lovett’ in the New York Philharmonic’s semi-staged production of Sweeney Todd , making her New York stage debut. Most recently she starred as P.L. Travers in Disney’s feature film Saving Mr. Banks. Thompson’s other film credits include The Tall Guy, Henry V, Dead Again, Peter’s Friends, Much Ado About Nothing, The Remains of the Day, In the Name of the Father, Junior, Carrington, The Winter Guest, Primary Colors, Wit, Angels in America, Imagining Argentina, Love Actually, numerous Harry Potter films, Stranger Than Fiction, Last Chance Harvey, Brave, Men in Black 3 and the Nanny McPhee films, for which she also wrote the screenplays and served as Executive Producer. Her recent television roles include BBC Two’s Song of Lunch and Sprout/SKY ARTS’s Walking the Dogs. To mark Peter Rabbit’s 110th anniversary, Thompson was commissioned to write a 24th tale — the first time Frederick Warne, the publisher, has added a title to the Beatrix Potter series. The resulting book, The Further Tale of Peter Rabbit, was published in September 2012, and in October the following year Penguin published Thompson’s The Christmas Tale of Peter Rabbit. This month, Penguin will also publish her The Spectacular Tale of Peter Rabbit.

Bryn Terfel is a Welsh bass-baritone who has performed in all the great opera houses in the world, and is especially recognised for his portrayals of Wotan in Wagner’s Ring Cycle which he has most recently performed at The Metropolitan Opera and the Royal Opera House, and the title roles in Mozart’s The Marriage of Figaro and Verdi’s Falstaff. He first sang the title role in Sweeney Todd in the Lyric Opera of Chicago’s production in 2002 and subsequently sang the role in semi-staged performances at the South Bank Centre in London in 2007. Other highlights of Terfel’s performances include Hans Sachs in Wagner’s Die Meistersinger von Nürnberg for Welsh National Opera and the hosting of Brynfest, a four-day event at London’s Southbank Centre held as part of the 2012 Summer Olympic celebrations. Terfel is also known as a concert artist, with past performances including the Royal Variety Performance, Last Night of the Proms, the opening ceremony of the Wales Millennium Centre and a performance in New York’s Central Park with tenor Andrea Bocelli and the New York Philharmonic. He has given recitals in the major cities of the world, and for nine years he hosted his own festival in Faenol, North Wales. A Grammy, Classical BRIT and Gramophone award winner, Terfel’s discography includes operas by Mozart, Wagner and Richard Strauss and more than ten solo CDs. His most recent album is Homeward Bound, recorded with the Mormon Tabernacle Choir. In 1991 Terfel made his English National Opera debut in the title role in Mozart’s The Marriage of Figaro. In 2003 Bryn Terfel was awarded a CBE for services to opera in the Queen’s New Year Honours list, and in 2006 he was awarded the Queen’s Medal for Music by Queen Elizabeth.

Philip Quast is a multi Olivier-award winning actor. His many UK musical theatre credits include Grahame Chandler in The Fix at the Donmar Warehouse, Georges Seurat in Stephen Sondheim’s Sunday in The Park with George and Emile de Becque in Rodgers and Hammerstein’s South Pacific both for the National Theatre, Juan Peron in Andrew Lloyd Webber’s Evita at the Adelphi Theatre and Georges in La Cage Aux Folles for the Menier Chocolate Factory. Quast played Javert in the original Australian cast of Les Misérables as well as in the West End and can be heard as part of Les Misérables Complete Symphonic Recording and on Les Misérables: The Dream Cast in Concert, recorded during the show’s tenth anniversary celebration at Royal Albert Hall. His concert engagements have included Sondheim’s Follies at the London Palladium, Night of 1000 Voices at the Royal Albert Hall, Hey Mr. Producer at the Lyceum Theatre, Sweeney Todd at Royal Festival Hall and Tsunami with the BBC Symphony Orchestra. The New York Philharmonic’s semi-staged production of Sweeney Todd as Judge Turpin was Quast’s New York stage debut.

Why book Sweeney Todd tickets with us? 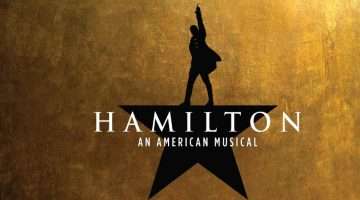 Hamilton at the Victoria Palace Theatre