Director Josie Rourke has announced her full cast for forthcoming revival of City of Angels at the Donmar Warehouse.

Rosalie Craig in City of Angels

Running from 5 December 2014 to 7 February 2015 at the Donmar, City of Angels will feature a cast that includes Samantha Barks, Rosalie Craig and Hadley Fraser, alongside Katherine Kelly, Tam Mutu, Peter Polycarpou and Rebecca Trehearn.

Rosalie Craig – who won an Olivier Award earlier this year for The Light Princess – will play the duel role of Gabby and Bobbi, alongside Les Miserables The Movie star Samantha Barks as Avril and Mallory.

With music by Cy Coleman, lyrics by David Zippel and a book by Larry Gelbart, City of Angels is a glorious and witty celebration of film noir, set in Hollywood.

The show will be directed by Donmar artistic director Josie Rourke with design by Robert Jones and choreography by Stephen Mear.

City of Angels info on WestEndTheatre.com 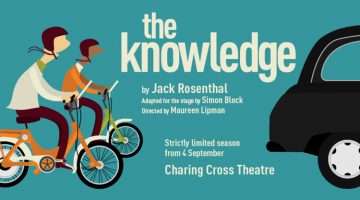 The Knowledge at the Charing Cross Theatre