Rehearsals have started for the forthcoming West End transfer of hit Almeida play King Charles III at the Wyndham's Theatre in London.

Rehearsals begin for King Charles III at the Wyndham’s Theatre.

Rehearsals have started for the forthcoming West End transfer of hit Almeida play King Charles III at the Wyndham’s Theatre in London.

The revival will see Tim Pigott-Smith return to production following his critically acclaimed performance as Charles, with Oliver Chris reprising his role as William.

Mike Bartlett’s acclaimed play, directed by Rupert Goold, was a smash-hit at the Almeida Theatre earlier this year and transfers to the Wyndham’s Theatre from 2 September 2014 for a limited season.

King Charles III is designed by Tom Scutt, with music is composed by Jocelyn Pook, lighting by Jon Clark and sound by Paul Arditti.

The play imagines a future time when the Queen is dead and Prince Charles finally ascends to the throne, exploring the people underneath the crowns, the unwritten rules of our democracy, and the conscience of Britain’s most famous family.

Book tickets to King Charles III at the Wyndham’s Theatre 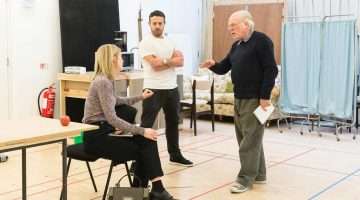