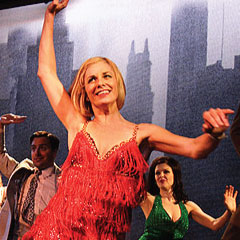 It’s hard to imagine a theatre in recent memory that has punched so high above its weight than the Menier Chocolate Factory in South London. With news last week that two of its 2009 productions have scored multiple Tony award nominations on Broadway, another Menier musical revival – this time Sweet Charity – has transferred into the West End. And guess what? The critics love it. Across the board the show enjoyed a critical consensus of four stars and much praise for the production and cast – including ex-EastEnders star Tamzin Outhwaite. See our critical picks below.

“When the show opened at the Menier last year I loved everything about Matthew White’s nifty production apart from one crucial thing. I didn’t think Tamzin Outhwaite cut it in the title role of Charity Hope Valentine, the dance hall hostess with a heart of gold… well what a difference a few months can make. The breezy vitality is still intact when it needs to be but, crucially, Outhwaite has deepened her performance by adding tenderness, pathos, even moments of despair.”

“The show itself is a joy. From the moments you hear the bleary, brassy opening notes of the show’s most famous number, Hey Big Spender, one knows — as the song promises — that one is in for a good time. The band handles Cy Coleman’s outstanding jazzy score with superb panache throughout. The cast do splendid justice to Dorothy Fields’s witty and often touching lyrics and Neil Simon’s gag-filled script, in which he largely avoids the mushy sentimentality that is so often his downfall.”

“Let’s get right to the point: it’s not the greatest musical ever written. Neil Simon’s book is just one thing after another, as Charity is duped by her lover, encounters an Italian movie star and then hooks up with Oscar, all of whom are played by Mark Umbers with a quick-change comic charm. But what the book lacks in structure, it makes up for with snarling humour. The women working at the dance hall, for instance, don’t see their job as dancing but as “defending ourselves to music”.”

“The show’s daffy joy and exhilarating choreography make it easy to overlook the fact that Tamzin Outhwaite’s Charity is too much of a little miss sunshine, never uncovering the vulnerable side that lends the character her wistful charm.”

“Matthew White’s blistering revival – transferring to the West End from the Menier Chocolate Factory – not only retains Neil Simon’s bitter sweet conclusion (another man, another cigarette, another chance) but tightens up the dialogue scenes, so that, for instance, the comedy of claustrophobia and vertigo in the lift and the fairground, is as pointed as in any Mike Nichols and Elaine May sketch.”

“It’s unusual to have such a level of performance in a musical – Umbers was the definitive Freddy Eynsford-Hill in the Martine McCutcheon My Fair Lady – and it raises everyone else’s game, not least Outhwaite’s. She really is a revelation, and Umbers as Superman on the fairground parachute jump, soon reverting to Clark Kent mode, pays her the ultimate compliment of loving her too much to live with her.”

“This is the heterosexual version of La Cage, staffed by equally resilient but even more downtrodden, world-weary sex workers. Matthew White’s production is rooted in a tough sense of reality, and although Tamzin Outhwaite’s punchy Charity may lack an essential vulnerability, she’s also quite clearly one of life’s survivors.”

“Transferring now to this much bigger space, there’s a risk that some of its breezy charm and vibrancy may be lost. Fortunately, this doesn’t happen. Instead there’s a mixture of energy, tuneful sweetness and jagged allure in the story of Charity Hope Valentine, a hostess in a sleazy dance hall in Sixties New York.”

“There’s excellent work around Outhwaite. Annalisa Rossi and Ebony Molina stand out among Charity’s workmates… Mark Umbers is animated as both Vittorio, who gives Charity a taste of the high life, and claustrophobic accountant Oscar, whose nerdy authenticity seems to offer the perfect antidote to her perennial heartache. His voice is shiningly sympathetic.”

“…the music is consistently as atmospheric and tuneful as Stephen Mear’s choreography, though much indebted to the great Bob Fosse, is crisp and lively. Both need to be, because the plot is pretty simple.”

“Outhwaite manages to seem innocent while being knowing, sweet without becoming sentimental, toothy yet not toothsome, artless and gamine but not gormless or goofy, sappy without leaving you feeling there’s no sap in her emotional make-up.”

“Supported by blazing brass from the band, Michael White’ s production does what Breakfast At Tiffany’s couldn’t in the same venue: sets the joint jumping. But there are also shades of Cabaret, Chicago, Hair and The Rocky Horror Show in a performance that feels like five musicals for the price of one.”