Mark Haddon leapt to prominence with his 2003 award-winning novel The Curious Incident of the Dog in the Night-Time, written from the perspective of a boy with Asperger’s syndrome. For his playwrighting debut he tackles another mental health problem and the effect it has not only on the sufferer but also on her nearest and dearest. 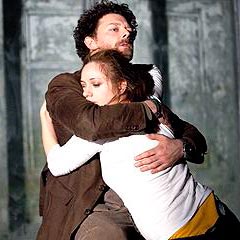 Told in intentionally jumbled flashback, it seems, at first, that it’s Richard Coyle’s John (a gentle, loving philosophy lecturer) who’s the one with psychiatric problems as he confronts his wife Kay’s horrified brother Sandy with the news that she’s lying dead in the cellar – and that he was the one who killed her. But as Haddon tracks the relationship from the couple’s first meeting, delving into the siblings’ childhood on the way, he exposes the psychological weaknesses of all his characters.

Despite the smart suit, well paid job and unseen trophy wife, the sadistic tendencies Paul Hilton’s Sandy exhibited as a little boy still lurk just below the harshly practical surface of the grown man. And Kay’s mother (a taut Celia Imrie) may, too, have exacerbated the bipolar predisposition her daughter inherited from her suicide father.

Nobody does anguish better than Jodhi May and she touchingly conveys the contrast between Kay’s apparent creative highs and her paralysed depressive lows. But the wayward script tends to get sidelined, introducing a Jesus like character who turns out to be a former lover and straying into self-indulgent dissemination of information which does little to flesh out the characters.

Jamie Lloyd’s well-acted 90-minute production benefits from Soutra Gilmour’s shattered, distancing design, and certainly has its arresting moments, but ends up struggling with a not altogether convincing depiction of a damaged and damaging reality.