Hollywood star Kristin Scott Thomas returns to the West End to play Her Majesty The Queen in Peter Morgan’s drama The Audience at the Apollo Theatre. 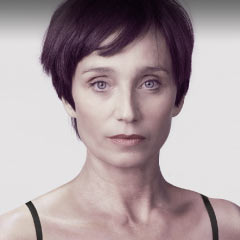 Kristin Scott Thomas was last seen on the London stage in 2014 in Sophocles’s tragedy Electra at the Old Vic Theatre directed by Ian Rickson.

In 2013 Scott-Thomas was in Ian Rickson’s revival of Harold Pinter’s play Old Times.

Kristin has also appeared as Arkadina in Ian Rickson’s celebrated production of The Seagull at the Royal Court Theatre. She won the 2008 Olivier Award for Best Actress, reprising the role on Broadway at the Walter Kerr Theater the following year, produced by Sonia Friedman Productions.

Scott Thomas’s extensive film credits include  The Invisible Woman, Before the Winter Chill, Only God Forgives, In the House, Looking for Hortense, Bel Ami, Salmon Fishing in Yemen, Sous Ton Emprise, Une Femme Parfaite and Nowhere Boy as well as Easy Virtue, The Other Boleyn Girl, the multi-award winning Gosford Park, The Horse Whisperer, The English Patient, Mission Impossible, Angels & Insects, for which she won the Evening Standard British Film Award for Best Actress, and Four Weddings and a Funeral, for which she won a BAFTA Award for Best Actress in a supporting role and the Evening Standard British Film Award for Best Actress.

On television her credits include Gulliver’s Travels, Belle Epoque, Body and Soul, Weep No More My Lady and The Secret Life of Ian Fleming.

Book tickets to The Audience at the Apollo Theatre