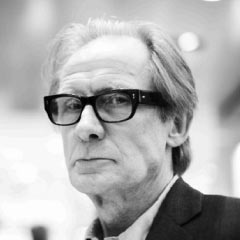 Bill is a multi-award winning actor on both stage and screen.

His stage work includes David Hare’s Pravda and Map of the World as well as the 1997 production of Skylight. He was also seen in the world premiere of Hare’s The Vertical Hour on Broadway.

On film his credits include Love Actually for which he won multiple awards, Wild Target, Pirate Radio, Valkyrie, AKA, Notes on a Scandal, Underworld and Underworld: Evolution, The Constant Gardner, Lawless Heart and Still Crazy. Nighy played the tenticled pirate captain Davy Jones in Pirates of the Caribbean: Dead Man’s Chest and Pirates of the Caribbean: At World’s End and Minister Rufus Scrimgeour in Harry Potter and the Deathly Hallows – Park One and Slartibartfast in The Hitchhiker’s Guide to the Galaxy.

On TV his credits include Page Eight, directed by David Hare, State of Play, The Girl in the Cafe, Gideon’s Daughter and The Men’s Room. More recently Nighy garnered great critical acclaim in The Best Exotic Marigold Hotel and was seen in Wrath of the Titans and Total Recall. Last year saw him in Jack and the Giant Slayer and About Time. As well as Skylight, Nighy’s 2014 projects include I, Frankenstein, Pride and The Best Exotic Marigold Hotel 2. He will also be reunited with David Hare for Turks & Caicos and Salting the Battlefield, the second and third instalments of The Worricker Trilogy television series.