Cary Mulligan (The Great Gatsby) makes her West End debut in the play, alongside Bill Nighy (The Best Exotic Marigold Hotel) and Matthew Beard (An Education).

The show’s designs are by Bob Crowley with lighting by Natasha Katz, sound by Paul Arditti and music by Paul Englishby.

Teacher Kyra Hollis (Carey Mulligan), who is eking out an existence in London, is visited on the same evening by a father and son: she had been living years earlier with the Sergeant family but left after an affair with the father, Tom Sergeant (Bill Nighy). The son Edward (Matthew Beard) saw her as a big sister who abandoned him and demands to know why she left in the way she did. Later, Tom arrives, her much older ex who is a successful restaurant entrepreneur. Where once they shared opinions on everything, from politics to class, now they stand divided.

Why book Skylight tickets with us? 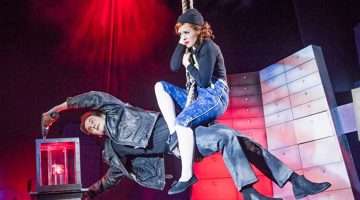