These two extraordinary icons, born just six months apart, are the protagonists of Buffini’s riotous comedy that speculates on what the world’s two most powerful women talked about behind closed doors and what did they really think of each other.

Designs are by Richard Kent, with lighting by Oliver Fenwick and sound by Carolyn Downing.

“A clever, mischievous pleasure with the sharp teeth of a kicked corgi” Metro 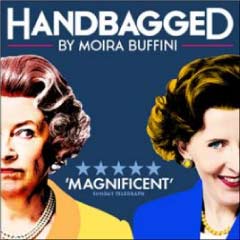 1 thought on “Handbagged at the Vaudeville Theatre”