Welcome to the Olivier Awards microsite for 2014

Welcome to this year’s microsite for the 2014 Olivier Awards.

Within this microsite you will find a wealth of information about the 38th annual Olivier Awards, organised each year by the Society of London Theatre to celebrate the very best of West End theatre.

WINNERS ANNOUNCED! SEE A LIST OF ALL WINNERS HERE 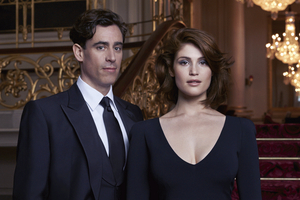 Stephen Mangan and Gemma Arterton, hosts of this year’s awards

This year’s Olivier Awards awards were held on  Sunday 13 April 2014 at the Royal Opera House in London.

The awards were hosted by movie and stage star Gemma Arterton, who will be starring in new musical Made in Dagenham this autumn in the West End, and comedian Stephen Mangan, who is currently starring in Jeeves and Wooster in Perfect Nonsense at the Duke of York’s Theatre. This year’s voiceover announcements were made by Julie Walters.

This year’s performers at the Awards included:

This year the awards were again broadcast by ITV in the UK, on the evening of the awards. Catch up with ITVPlayer.

Large screens in the Piazza also broadcast the Awards live.

A special BBC Radio 2 programme will air at 6pm on Saturday 18 April 2014. The two-hour highlights programme will be hosted by Claudia Winkleman and feature backstage interviews, special guests and highlights from ceremony.

Check back for the latest news, photos and information on the 2014 Olivier Awards.