Rock of Ages at the Helen Hayes Theatre | Broadway Tickets

Featuring some of the greatest rock songs of the ’80s, Rock of Ages is a full-on theatrical party and the ultimate feel good night out.

It’s a love story that will have you rocking, rolling, head banging and wailing along to your favorite songs – including “Don’t Stop Believing,” “Hit Me With Your Best Shot” and “Wanted Dead or Alive” from Journey, Styx, Bon Jovi, Whitesnake, Poison, Foreigner, Pat Benatar and more!

It’s 1987 in Los Angeles, and Drew, the janitor of a night club, longs to take the stage and front a rock band. Fresh faced Sherri has just arrived from Kansas with musical aspirations of her own. When corporate buyers threaten the Sunset Strip club that they call home, the team of outcasts, including legendary rocker Stacee Jaxx, must fight for their club and each other.

“Is there a Tony Award for Badassery?! The New Yorker
“The most remarkable Broadway experience I’ve ever had” The Village Voice
“Absurdly enjoyable! About as guilty as pleasures get!” The New York Times
“The real deal! A cranked-up crowd-pleaser!” The New York Daily News
“Insanely fun! Rock and comedy in perfect proportion!” Time Out New York
“Dazzling vocal pyrotechnics! The audience erupts in an emotional frenzy.” Chicago Tribune

Rock of Ages to close 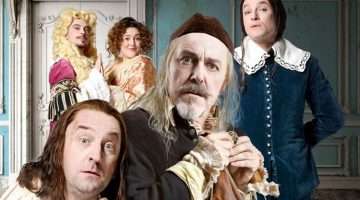