Winner of the Tony award for Best Musical, Jersey Boys is the acclaimed musical that tells the story of New Jersey boys Frankie Valli and the Four Seasons.

Jersey Boys tells the story of how Frankie Valli and The Four Seasons went from unknown kids to international superstars.

From the wrong side of the tracks, the boys became one of the most popular musical acts of the Sixties.

Directed by Des McAnuff and written by Marshall Brickman and Rick Elice, with music by Bob Gaudio and lyrics by Bob Crewe, Jersey Boys is full of classic hits including “Sherry,” “Big Girls Don’t Cry,” and “Walk Like a Man” as well as post-Four Seasons songs like Gaudio-Valli smash “Let’s Hang On! (To What We’ve Got)” and Valli’s breakout hit “Can’t Take My Eyes Off You”.

From mob ties, gambling addiction, infidelity, loan sharks, crippling debt and mismanaged money, to divorce, death and the painful estrangement of life on the road, the drama and the music of The Four Seasons lives on in this tremendous show.

Jersey Boys is told over four seasons, with each season narrated by one of band members: lead troublemaker Tommy DeVito, quirky and loyal Nick Massi, musical wunderkind Bob Gaudio and, of course, the diminutive Frankie Valli, whose dreamy falsetto lead vocals would go on to define the band’s inimitable style. 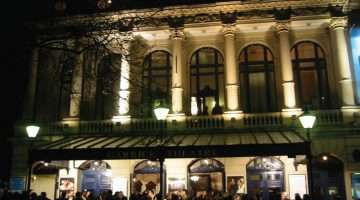