Production photos of Jeeves and Wooster at the Duke of York’s Theatre.

P.G. Wodehouse’s Jeeves and Wooster make a welcome return to the West End this winter in Perfect Nonsense, written by The Goodale Brothers.

The charmingly incompetent Bertie Wooster and his unflappable valet Jeeves are brought to life in a new comedy by Robert and David Goodale, directed by Sean Foley (The Ladykillers).

The show stars Matthew Macfadyen and Stephen Mangan as the legendary duo, playing at the Duke of York’s Theatre for a limited run.

Jeeves and Wooster at the Duke of York's Theatre 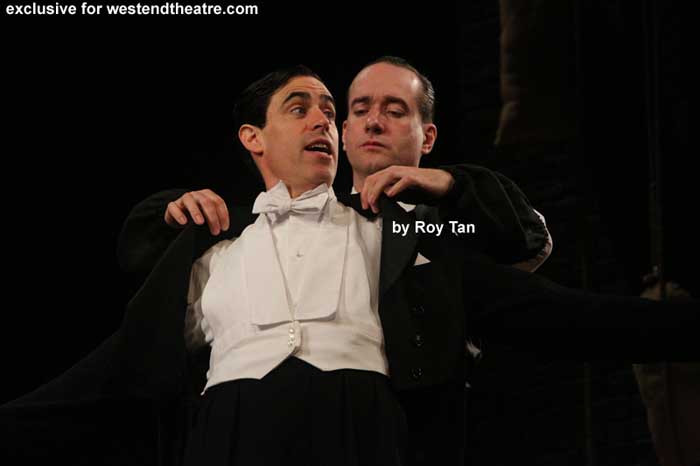 Jeeves and Wooster at the Duke of York's Theatre. Photo: Roy Tan

Jeeves and Wooster at the Duke of York’s Theatre

Stephen Mangan is best known for roles including Guy Secretan in the television series Green Wing, Dan Moody in I’m Alan Partridge, Sean Lincoln in Episodes and holistic detective Dirk Gently in Dirk Gently. He has also appeared in numerous stage productions including Birthday and The People Are Friendly at the Royal Court and The Norman Conquests at the Old Vic and Circle in the Square Theatre in New York.

Sean Foley is an award-winning actor, writer and director. He co-founded The Right Size, creating over ten original comedies for the theatre including the Olivier Award-winning and Tony-nominated production of The Play What I Wrote (Best Comedy 2002) and Do You Come Here Often? (Best Entertainment 1999). Theatre credits include: the multi Olivier-nominated The Ladykillers (Liverpool Everyman, Gielgud Theatre, UK Tour), Ben Hur (Watermill Theatre/Fiery Angel), What The Butler Saw (Vaudeville Theatre/MJE Productions), The Painkiller (Lyric Belfast), The Critic/The Real Inspector Hound (Chichester Festival Theatre) and The Armstrong and Miller Show Live UK Tour. Radio includes: The Remains of Foley and McColl, Foley And McColl Again and Foley And McColl: This Way Up (BBC Radio 4). Television includes: Foley And McColl: This Way Up (BBC2). Foley’s production of A Mad World, My Masters, opens at the Royal Shakespeare Company this spring. Alongside this, he is also writing a new version of Amadée for Birmingham Rep and a comedy for television based on The Pickwick Papers for Kudos/BBC.

Like many siblings growing up together, writers Robert and David Goodale enjoyed their own, very particular brand of humour. As children they created a range of ridiculous characters that seamlessly evolved into members of their extended family. It was only later that they discovered that P.G. Wodehouse had beaten them to it, in creating an entirely credible world full of even more deliciously bonkers characters. As adults entering the real world, Robert became an actor, while David pursued a career as a documentary filmmaker, but both remained committed to making people laugh. Two years ago they were encouraged to combine their comic talents to adapt P.G. Wodehouse’s The Code of the Woosters for the stage. They finally put pen to paper, and several drafts later, with the blessing of the Wodehouse Estate, Perfect Nonsense was born.