A round-up of reviews for Much Ado About Nothing at the Old Vic.

A round-up of reviews for Much Ado About Nothing at the Old Vic. 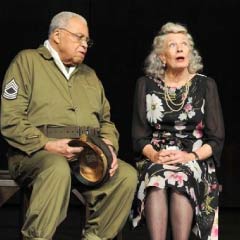 James Earl Jones and Vanessa Redgrave in Much Ado About Nothing

The reviews are in and the critics have been less than impressed by a new production of Shakespeare’s Much Ado About Nothing at the Old Vic directed by Mark Rylance.

The reluctant lovers Beatrice and Benedick are played by theatre legends Vanessa Redgrave and James Earl Jones in a production that comes under quite a battering for its central premise, design and casting issues.

See review highlights below from the Guardian, Telegraph, Daily Mail and more.

Book tickets to Much Ado About Nothing at the Old Vic

“I am the last person to complain about senior citizens being given free rein. I also hold Vanessa Redgrave and James Earl Jones in high regard and thought their performances in Driving Miss Daisy were magical. But casting them as Beatrice and Benedick is another matter and results, in Mark Rylance’s hands, in one of the most senseless Shakespearean productions I have seen in a long time.”

“Ultz’s minimalist set, incorporating a huge arch centre stage may, as the programme suggests, honour Tyrone Guthrie’s 1940s productions, but it also muffles sound in a production that suffers many problems with audibility. It hampers movement too: there’s too much stop and start for a play that needs to be nimble.”

“Among the supporting cast Peter Wight impresses as that rare thing, a genuinely funny Dogberry, usually one of the most tedious characters in Shakespeare, and I loved the idea of the village watch being largely made up of boy scouts.

But frankly it’s a relief when this laborious and misguided production grinds to a halt and everyone is still standing.”

“The production is a car crash… The fault is not that of the two harmless oldsters, who look on in a state of sleepy bewilderment at the disaster they’re involved in. The blame lies mainly with the maniac at the wheel.”

“The chemistry between the pair is touching and there is some lucid work in the supporting roles. Yet the comedy doesn’t sing. There is little sense of giddy joie de vivre or of the brilliance of the main characters’ barbs and quips. Although I imagine the production will become more fluent, for now it seems underpowered and confused.”

“Her [Vanessa Regrave] Beatrice’s energy levels seem low and she never persuaded me she was really in love with Mr Earl Jones’s Benedick.”