Laurence Fox stars in gripping thriller Strangers on a Train at the Gielgud Theatre.

This gripping thriller, which was also made into a classic movie by Alfred Hitchcock, sees an innocent conversation on a train turn into a dangerous reality for Guy Haines (Laurence Fox) when he meets Charles Bruno (Jack Huston).

A deadly tale of blackmail and psychological torment, Haines is left with the choice of killing or being framed for a murder he didn’t commit.

Strangers on a Train was turned into a hit 1951 movie by Alfred Hitchcock starring Farley Granger and Robert Walker.

Director Robert Allan Ackerman returns to the West End stage following a run of hit productions on Broadway including Taken in Marriage with Meryl Streep and Extremities with Susan Sarandon. In the West End his credits include When She Danced with Vanessa Redgrave and Burn This with John Malkovich. 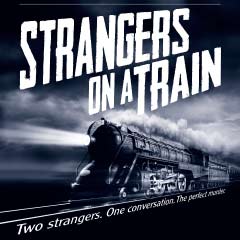