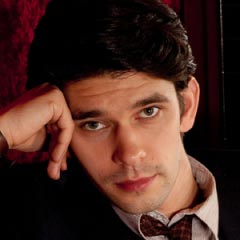 Ben Whishaw has been a famous face for quite a while now, but his star power has been boosted considerably by his recent role as Q in the latest James Bond movie Skyfall. Plus a BAFTA for his performance in Richard II and international TV acclaim for The Hour mean Ben is officially HOT PROPERTY.

Ben’s film credits include The Zero Theorem, In The Heart Of The Sea, Lilting, Cloud Atlas, Skyfall, For Viola And Piano, The Tempest, Bright Star, Brideshead Revisited, The International, I’m Not There, Restraint Of Beasts, Perfume: The Story Of A Murderer, Stoned, Enduring Love, 77 Beds, Layer Cake, The Trench, My Brother Tom and The Escort.

Ben Whishaw’s TV credits include Richard II, for which he won a Best Leading Actor BAFTA, The Hour, All Signs Of Death, Criminal Justice (Winner – International Emmy Award For Best Actor 2009), Nathan Barley, Booze Cruise, Ready When You Are Mr. Mcgill and Other People’s Children.

On stage Ben has appeared in Peter And Alice alongside Judi Dench, The Pride, Cock, Some Trace Of Her, Leaves Of Glass, The Seagull, Mercury Fur and Hamlet for Trevor Nunn at the Old Vic.